Taiwan: In Front of a Busy Library in Taipei (Photos)

(Minghui.org) Falun Gong practitioners from Taipei gathered in front of National Taiwan Library on the afternoon of October 13, 2012. They did the five exercises following the pleasing music, drawing attention from passersby. Some watched and a few copied the movements of the exercises. Practitioners gave out fliers, which many began reading right away. 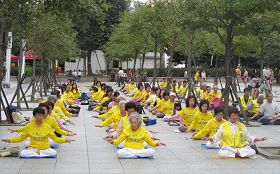 Practitioners do the exercises in front of National Taiwan Library 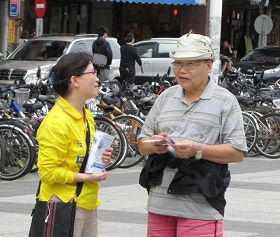 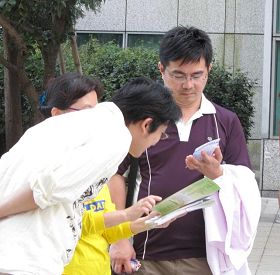 Passersby carefully read the fliers as soon as they get them

A man in his 70s said that he had been looking for a way to improve his health for many years. When he saw practitioner Mr. Wang, who is 85 years old and very healthy and energetic, he complained, “How come it took you so long to come and tell us (about the beauty of Falun Gong)?” Later this man joined a Falun Dafa Nine-day Lecture Class and became a practitioner.

A man who lived nearby stopped and looked at the practitioners for some time before asking, “Why do Falun Gong practitioners all have such healthy complexions? Several of the older men and women have been standing for a long time, but they do not look tired. That is amazing.” He had heard about Falun Gong and was also curious about why the Chinese regime suppresses such a good practice and good people.

Practitioner Ms. Lu Lijuan told them about the introduction of Falun Dafa, how 100 million Chinese began to practice it within a few years, and how the Chinese regime banned it in 1999 because the regime could not tolerate Falun Gong’s ideology. Ms. Lu also told them about the Chinese government's complicity in removing practitioners’ organs while they were still alive and selling them for lucrative profits. The man who lived nearby said, “No wonder the source of organs in China is so abundant. Now I understand.” He asked about the practice sites and dates of the Nine-day Lecture Classes before he left.

Ms. Lu said that this kind of activity can help more people find out about and understand the beauty and magnificence of Falun Dafa. “Some people wanted to learn Falun Dafa but we do not have an office or any kind of formal organization, so they had a hard time finding us. One day someone saw us doing the exercises and ran to up us, saying, ‘I finally found it!’ Some of them attended the Nine-day Lecture Class and became practitioners. Half of the new practitioners in our class joined us because they saw us do the exercises in public.”