(Minghui.org) Today's news from China includes incidents of persecution that took place in 5 cities or counties in 3 provinces. According to this report, 5 practitioners were subjected to mistreatment during detention, and at least 5 practitioners were illegally arrested. 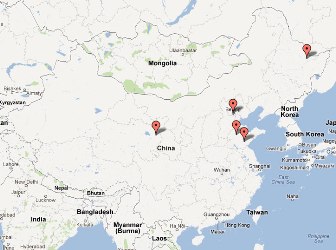 Officers from the Pingyin County 610 Office and Domestic Security Division arrested Ms. Sun Hua and Ms. Zhang Qiuyun on September 23, 2012. The police also ransacked their homes. The two practitioners were released that night.

Ms. Shi Shengjie was picked up by the plainclothes police officers who were waiting near her home on the morning of October 1, 2012. She was taken to the Xiangyang Police Department in Hegang.

On September 27, 2012, at about 1 a.m., Mr. Si Xisui, 38, from Jizhou, Hebei Province, was arrested at work by officers from the Yongdinglu Police Station in the Haidian District. The police ransacked his home and took two computers and Falun Dafa books. He is now the Haidian District Detention Center. When his wife tried to stop the police from ransacking their home, she was detained for 12 hours.

Mr. Cao Shengxiang, 56, was arrested by Xining domestic security officers on the morning of June 23, 2012. He was taken to the Ershilipu Detention Center in Xining. Now he is in the Xining First Detention Center. His family is not allowed to visit him.