January 06, 2012 |   By a Clearwisdom correspondent in Gansu Province, China

(Clearwisdom.net) Mr. Zhang Dengchun started practicing Falun Gong in 1998, seeking a cure for his heart disease. The hospital could not cure him, but his practice of Falun Gong had an obvious effect and he recovered.

Mr. Zhang has been detained and persecuted many times since 2000. In 2003, he was sentenced to four years of imprisonment by the Liangzhou District Court. He suffered persecution at Wuwei Prison, and was transferred to Jiuquan Prison in December 2005. He left there in 2006.

On July 3, 2009, Zhang Dengchun was arrested again by agents led by Meng Xinping, chief of the Liangzhou District Domestic Security Division, for distributing truth-clarification materials, and sentenced to four years. Again, he was sent to Jiuquan Prison No. 4 District in Gansu Province.

Mr. Zhang was isolated in a room and forced to watch videos that slandered Falun Gong and listen to prisoners reading materials that slandered Falun Gong. Prisoner Ma Shirui often insulted him with words and deeds. They forced him to stay in the corridor on the floor in the winter and intentionally let him freeze. The police were aware of his advanced age and that he could not even straighten his back when he came into the prison, yet they instigated prisoners to drag him by the arms and force him to run in the courtyard.

This so-called forcible “transformation” process lasted for over two years. Mr. Zhang's health became worse and worse, and he was diagnosed with high blood pressure. Police officer Ma Qiang transferred Mr. Zhang from the Strict Discipline Team No. 1 to Team No. 2. That same day, Mr. Zhang lost control of his bowels and was sent to a hospital outside of the prison to be examined. He was found to be critically ill. In order to avoid responsibility for his condition, the prison extorted money from Mr. Zhang's family and released him in early September 2011.

When his family picked Mr. Zhang up from the prison, they took him directly to the hospital. After two weeks in the hospital, he was released, but he could not get out of bed. He had lost control of his bladder and bowels. He can't hear well or talk, and his feet are still swollen. He can barely sit up with a large pillow to support his back, and his weight has dropped from 80 kgs to 50 kgs. 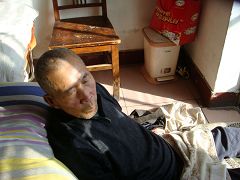 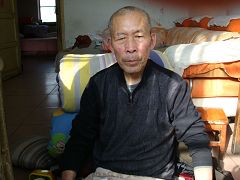 Zhang Dengchun can only sit up with the support of bedding. 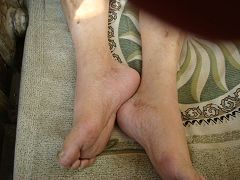 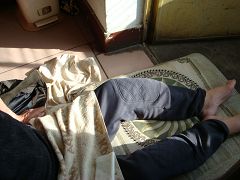 Mr. Zhang cannot pull up his trousers completely due to incontinence and loss of bowel control.

The police instigate criminals to take turns watching practitioners, depriving them of sleep for a long time, torturing them with electric batons, and hanging them up while torturing them. Other methods used include intense forced labor, solitary confinement, verbal abuse and slander attacks. They use torture to try to force practitioners to write the so-called three statements (repentance, statement of giving up their belief and so on). Further, they force practitioners to watch videos that slander Falun Gong.