(Clearwisdom.net) The largest outdoor Chinese New Year Fair in Victoria Park in Hong Kong was open to the public from January 17 to 23, 2012. Since 2000, Falun Gong practitioners in Hong Kong have set up a truth clarification booth at the fair each year. They've distributed informational materials, VCDs, and handmade paper lotus flowers; spoken with citizens and tourists about Falun Gong; and displayed the wonderfulness of Falun Dafa. On Chinese New Year's eve this year, nearly 400,000 people visited the fair in Victoria Park. Many of them were given Falun Gong brochures and lotus flowers by practitioners. 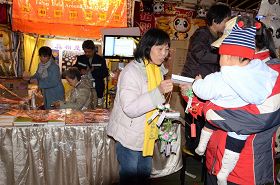 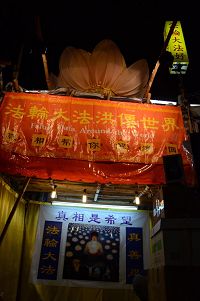 Practitioners' booth was so conspicuous that many people wanted to meet their friends and relatives nearby. This year, a huge lotus flower and a long light box bearing the words “Falun Dafa Is Good” were placed on top of the booth. Inside the booth was a poster “Truth Is Hope.” Practitioners prepared a large number of informational brochures and VCDs, books, and DVDs of the Nine Commentaries on the Communist Party. They also made more than ten thousand paper lotus flowers. While handing out the flowers, practitioners told people to remember “Falun Dafa is good,” to learn the truth to be safe, and to treat Dafa kindly to obtain real peace.

The number of people visiting the Chinese New Year Fair this year exceeded previous years' attendance. The park was packed, particularly on Chinese New Year's eve, and it was crowded in front of the Falun Gong booth. Many people wanted the beautiful little lotus flowers that practitioners had made. Some people put the lotuses into their bags like a treasure or read out words “Falun Dafa is good” on the bookmark attached to the flowers. Many people wanted more lotuses to give to their friends and relatives. Others came to the booth to learn more about Falun Gong and how to practice it. Some bought copies of Zhuan Falun and other Falun Gong books. Others shouted “Falun Dafa is good!” as they passed by.

There were also many Chinese tourists. A lady took a lotus flower from a practitioner and said that she had read the Nine Commentaries and wanted to support Falun Gong. One tourist bought about seven Falun Gong books and said that he would take them back to China.

Young people showed interest in the Falun Gong booth. A group of them accepted lotus flowers and joyfully shouted, “Falun Dafa is good! Disintegrate the CCP!” A young woman took a lotus flower, immediately gave it to her friend nearby, and insisted that each of her friends take one. They left happily with lotus flowers.

It seemed to the practitioners that more and more people have learned that truth is the hope for them to be saved and have therefore seized the opportunity to obtain the blessings of the truth in the New Year.