(Clearwisdom.net) Practitioners in Helsinki, Finland, gathered at the central railway station on January 14, 2012, to expose the persecution of Falun Gong by the Chinese Communist Party (CCP) and to call for people to work together to bring an end to the persecution in China. 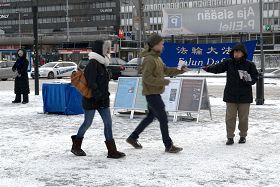 At noon, despite the cold winter wind, practitioners held banners, set up display boards, distributed truth clarification materials to passersby, and demonstrated the exercises. As a steady stream of people passed by, what they saw first was a banner with the golden words “Falun Dafa” on a blue background.

A Finnish lady said, “I signed the petition to support (Falun Gong) in the summer. I'm often concerned about your news. Please remember that I've always supported you! I hope everything goes well for you!”

A group of Chinese tourists passed by. After viewing the displays, they walked up to a practitioner, saying, “We're here traveling and want to take more informational materials to read. We also read the Epoch Times newspaper regularly. We are on your side.” They happily left with materials.

Western practitioner Heikki said, “The presidential election is coming up, and many people in the street are passing out flyers for their candidates. At first, people thought that we were giving them some kind of political flyer, so they were reluctant to take it. But later on, when they saw clearly the content of our flyer, they said, 'Falun Gong. It's what I want.' Some people took the flyer and asked for information about the venue and time of our local group practice.”