January 12, 2012 |   By a Clearwisdom correspondent from Jilin Province

My entire family started practicing Falun Gong in 1994. After just three days of practicing, my husband recovered from liver ascites. Everyone in my family benefitted greatly from the practice. After July 1999, when Jiang's regime started to persecute Falun Gong, my family continued to practice, and has been mistreated.

Subjected to Beatings and Detention for Appealing for Falun Gong

On July 20, 1999, my entire family went to the provincial government to appeal for Falun Gong. We were all arrested and taken to the detention center that afternoon. After we were released, we wrote an appeal letter to Jiang Zemin, head of the Chinese Communist Party (CCP), and asked for the right to practice Falun Gong. Our letter was intercepted by the police. We were all arrested, sent to the detention center, and detained there for three months.

On December 10, 2001, my husband and I went to Tiananmen Square in Beijing to appeal for Falun Gong. Five or six police officers grabbed my hair and dragged me into a police van. They viciously beat us with batons after we were inside the van. We were escorted back to our hometown two days later. Jiang Yingfen, head of the politics and security section in the police department, instructed the police to brutally beat us. They slapped my face and my head, causing dizziness and bleeding from my mouth and nose. They kept yelling at me as they beat me, and they took turns beating my husband as well. After my husband fell down, they continued beating him until he was unable to get up. Police officer Jin Yingchong even trampled my husband's hands while he was on the ground.

In 2002, officer Jiang Jinglao gave orders for me to be given an injection of unknown drugs that affected my nervous system, causing me to walk abnormally with pain in my left leg for over nine years. 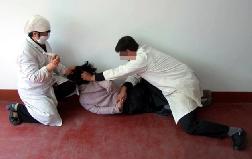 My Son-in-law Tortured to Death

My son-in-law, Cai Fuchen, was arrested in Yanji City in 2004 for printing truth-clarifying materials. He was sentenced to ten years and incarcerated at Kongzhuling Prison, in Jilin City. He was brutally tortured in the prison, including being confined in a solitary compartment on many occasions, being shocked with multiple electronic batons, etc. They even shocked his genitalia. He died on September 15, 2010.

My Family Members Were Arrested Multiple Times and Beaten

My husband and son were arrested again in 2005. Officer Bu Xianquan ordered me to sign the arrest document, but I refused. He started to hit my face with a leather bag and kicked my legs and back. I was beaten from the morning of the first day until 3:00 a.m. the next day. I was unable to walk or straighten my back, and had to lean over at a 90-degree angle. My husband and son were sent to Jiutai Forced Labor Camp in the summer of 2005.

In May 2006, the police broke into my home again. They took away the book Zhuan Falun and arrested me. I was held in a detention center for more than ten months, and then sentenced to four years in prison and sent to Hezhuizhi Prison. The prison guards instigated the collaborators to torture me any way they could. I was forced to stand from 5:00 a.m. to 11:30 p.m. every day. Twenty days later, my feet hurt so much that I could not stand and they were so swollen that I could not put shoes on. I sweat all over and my heart beat so hard that I fell down.

I was released in late October 2009. My pension was intercepted, so I went to my original work unit and was told it was stopped following an order from the 610 Office. Li Hao, head of the 610 Office, yelled at me, "You were fired and will not receive a pension."

I consulted my lawyer and was informed it was illegal to stop my pension. I reasoned with them and finally they reissued my pension. However, they illegally stopped my pension again in 2010.