(Clearwisdom.net) On August 31, the Divine Land Marching Band of Malaysia, consisting of local Falun Gong practitioners, performed on a boat going around Pulau Ketam island, a famous tourist spot, to celebrate the 54th Independence Day of Malaysia. The unique performance was warmly welcomed by the tourists. 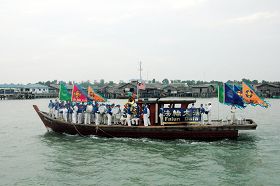 Divine Land Marching Band performs on a boat going around the island. 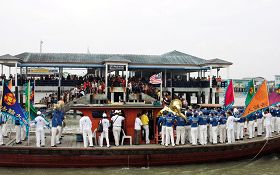 The boat passes by the harbor. 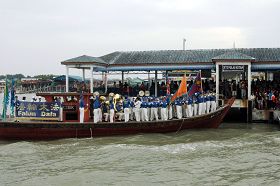 The band performs at the harbor.

The performance voyage started at 3 p.m. Practitioners decorated the boat with colorful banners which read “Falun Dafa is good”. They played several songs composed by practitioners as well as some Malaysian folk songs. Many people, both locals and tourists alike, watched the performances and waved as the boat passed.

The boats went around two populous fishing villages, with the whole trip lasting one and a half hours. At the end, practitioners performed at Ketam Harbor, and played the national anthem, Negaraku, and a Malaysian folk song, Rasa Sayang.

The tourists were very excited. Many of them shouted “Happy Independence Day” and took photos or videos of the performances. 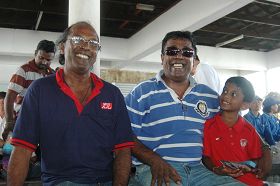 RMR Manikaraja and his family liked the performance.

RMR Manikaraja and his family are from the capital, Kuala Lumpur. He said that the band's performances made him very happy. They were really tired when they came back to the harbor after the trip around the island, but the performances cheered them up.

Menian, Manikaraja's brother, can speak Cantonese. He had been bored while waiting for the boat, but the performances made him happy. “Beautiful. Really beautiful. Thank you very much, and happy Independence Day,” he said to the band.

Many local people also appreciated the performance. Several even called on members the next day, expressing their gratitude.

Ketam Island is a famous tourist spot. Most residents are fishermen, and 90% are Chinese descendants.