Disabled Police Officer Jailed Twice for Holding to His Beliefs

September 05, 2011 |   By a Clearwisdom correspondent from Heilongjiang Province, China

(Clearwisdom.net) Jin Chengshan was formerly an officer in the Hulan District Police Department in Harbin. In a car accident in 1996, he sustained a thoracic spine fracture and became paralyzed—a first class disability. Modern medicine could not cure him, but he was introduced to the practice of Falun Dafa and experienced great physical and mental benefits. Witnessing his improvements, his wife, Jiao Xiaohua, also started practicing Falun Dafa.

After the Chinese Communist Party (CCP) began persecuting Falun Dafa, Mr. Jin refused to give up his beliefs and was poorly treated on multiple occasions. He was jailed twice, the CCP claiming that Mr. Jin, who could not even walk, “undermined law enforcement” and “disrupted the social order.”

At around 3:00 p.m. on March 10, 2005, deputy director Jiang Jimin from the Hulan District Police Department, and Chen Zhaolin from the Domestic Security Bureau ordered over 20 officers to break into Jin Chengshan's home. Four or more strong officers held him in a chair and handcuffed him. They also handcuffed his wife, Jiao Xiaohua, then forced her to the bathroom floor. The other officers then started ransacking the home.

The police confiscated 13,000 yuan in cash, a desktop computer, two printers, one copier, one scanner, two laminating machines, one paper cutter, over 1,000 CDs, three electronic book readers, two pagers, one mobile phone, one USB disk, over 250 3.5 inch disks, at least 20 packages of photo paper, about 2,000 plastic covers for laminating machines, 20 boxes of high-quality A4 size printing paper, over 500 Falun Dafa books, and at least ten sets of CDs containing Falun Dafa lectures. The total value of what was stolen was more than 50,000 yuan. The officers even took about 20 packages of plastic urine-collection bags used by Mr. Jin. At least ten police officers stayed for three days in Mr. Jin's home following their break-in.

After the break-in, Mr. Jin tried to locate Jiang Jimin and Chen Zhaolin to request the return of his personal property and also to clarify the truth to them. He wanted to explain that it was illegal to persecute Falun Gong. However, Jiang and Chen avoided him and refused to respond to his requests.

Robbed Again and Sentenced to Five Years in Prison

On October 15, 2006, Mr. Jin's wife visited the home of practitioner Ms. Yu Huaicai (who was later killed as a result of the persecution) to deliver a gift. Police were hiding in Ms. Yu's home and stole the house key belonging to Mr. Jin's wife. More than ten officers then broke into Mr. Jin's home again. This time, they confiscated one laptop computer, a set of wireless cards, one printer, one CD recorder, over 2,000 CDs, one mobile phone, and other items valued at approximately 5,000 yuan. This time, seven to eight police officers remained in his home for about two days.

On November 18, 2006, Mr. Jin and his wife went to the Hulan District Police Department to ask for the return of their personal belongings. They explained the facts about Falun Dafa to Chen Zhaolin and some of their former colleagues. Since Jiang Jimin and Chen Zhaolin took advantage of the persecution of Falun Gong to rob practitioners and extort fines, this created a great impact on the police department employees and in the community. One of Jiang and Chen's coworkers told Mr. Jin, “Leave and don't ask for your property anymore. There are no laws or reasons required to persecute Falun Gong. When they steal or extort fines, they divide all the money and property. However, they didn't divide up your belongings. They saved all of them, because you've been looking for them. They are thinking about how to punish you.”

During this time, Mr. Jin was held in the ambulance for five to six hours with his hands cuffed behind him. Since he couldn't change his urine bags, his bed clothes were soaked in urine and remained that way for 7-8 hours, until about 1:00 a.m. in the morning, when he was carried to a bed. However, the bed clothes provided by the Fourth Detention Station were stolen by other inmates, so Mr. Jin was forced to stay in his urine-soaked clothes. It took over ten days for his clothes to dry on his body. Since Mr. Jin couldn't take care of his daily needs, he was forced to urinate in a plastic bag, and his defecation was removed by his wife, using only her fingers. One can imagine his terrible life in the detention station. The inmates hated and verbally abused him. Since he was soaked in urine for so long, and no one was taking care of him, the second day after he was arrested, Mr. Jin's thighs, buttocks, and waist began swelling and bleeding. After noticing this, the Fourth Detention Station called the Hulan District Police Department and told them to take Mr. Jin back. However, the Hulan Police Department refused, so Mr. Jin remained in the Fourth Detention Station. 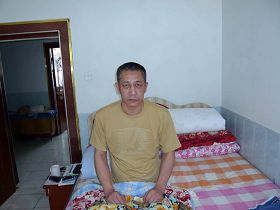 Jin Chengshan after being persecuted

In February 2007, Gong Shili and others from the Hulan District Court went to the Fourth Detention Station twice to conduct a “trial” for Jin Chengshan. Mr. Jin requested a public trial so that his family could attend. Gong Shili denied his request. Mr. Jin asked Gong Shili to state the crime that he was charged with. Gong replied, “Using an Evil Cult to Undermine Law Enforcement.” Jiang Jimin and Chen Zhaolin from the Hulan Police Department broke into Mr. Jin's home twice, confiscated over 50,000 yuan in private property, and more than 13,000 yuan in cash. Because Mr. Jin went to the police department and requested the return of his property, the officials were unable to secure their illicit items stolen from him. One year, nine months, and 12 days later, Mr. Jin was arrested again. Mr. Jin asked Gong Shili to state the charges, identify what evil cult he used, and which law he broke. Mr. Jin said, “Falun Gong teaches one to be a good person, following the principles of Truthfulness-Compassion-Forbearance. Falun Dafa has now spread to over 100 countries all over the world.” Mr. Jin asked Gong Shili to present legal evidence, but Gong could not provide any. Instead, she replied, “We cannot make a decision, we can only follow the orders from our supervisors.” The officials quickly concluded the trial following this statement, read a few sentences of fabricated evidence, then sentenced Mr. Jin to five years in prison, and Ms. Jiao Xiaohua to three years in prison.

Nine days after the court verdict was issued, Wang Cai took Mr. Jin to Hulan Prison. The guard on duty at the prison gate saw Mr. Jin and said, “He is already in such poor condition, and he used to be a police officer. Isn't this just an issue of belief? Aren't you trying to kill him by bringing him here? Take him home!” Wang Cai was so embarrassed that he was speechless.

On April 24, 2007, the same day that Mr. Jin was taken to the training group of Hulan Prison, he was immediately taken to the prison hospital, since he couldn't take care of himself. In June 2007, Mr. Jin Chengshan was robbed again in the prison hospital by police officer Nan Ming and others. They took Mr. Jin off his bed and placed him on the floor, then stole 200 yuan from him, which was given to him by his daughter. Since Mr. Jin refused to write a guarantee statement giving up his belief in Falun Gong, Mr. Jin's daughter and family were often not allowed to visit him in prison. The longest period of time between visits was four months.

Due to his poor physical condition, he remained in the prison hospital throughout his detention. During his two years in prison, over 20 inmates took turns in taking care of him, but since they didn't know how to care for him, he developed severe infections. During the entire two years, he had to sleep on his stomach. His knees and legs festered countless times. His bed linens were full of blood and pus. The mattress was replaced several times. Every day, he was subjected to abuse by inmates and guards. It is difficult to imagine how he survived such extreme pain.

In June, 2009, Ms. Jiao Xiaohua finished her term in the Heilongjiang Women's Prison. She went to the Hulan Prison several times to get her husband. Finally, Mr. Jin was released for medical treatment. They lived on their daughter's meager income, since Mr. Jin received no salary after his arrest, and his wife was unemployed for many years.

On May 5, 2010, Mr. Jin was in the process of obtaining temporary release documents for his medical treatment, when director Zhao Qingjun and others from the Yuanye Police Station, together with more than ten officers from Hulan Prison, took Mr. Jin from his home to the prison again, claiming that Mr. Jin had refused to be monitored. Ms. Jiao Xiaohua and their daughter resisted. They visited the prison and the prison supervising departments in the province numerous times, asking the prison officials to adhere to the law and release Mr. Jin immediately. In September 2010, after four months of vigorous protests, Mr. Jin Chengshan, who was suffering from severe injuries as a result of torture, was released again.