September 04, 2011 |   By a Clearwisdom correspondent from Hubei Province, China

(Clearwisdom.net) Ms. Yu Yimin, a Falun Gong practitioner from Wuhan City, passed away in the early morning of August 5, 2011. She had been arrested five times, jailed in brainwashing centers three times, and sentenced to one year of forced labor for her belief. In detention, she was injected with unknown drugs, which along with the torture, caused her to suffer a mental breakdown. Ms. Yu was also fired by her company for her belief in Falun Gong. Without financial support, she became homeless and destitute. Her family was torn apart due to the persecution. 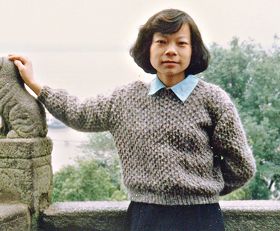 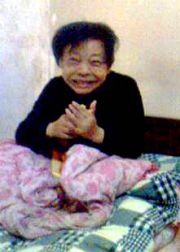 In the early 1990s, when Ms. Yu was in her early 30s, she was diagnosed with a brain tumor. After surgery, she was very weak and had to rely on medication to sustain her life.

On July 20, 1999, the Chinese Communist Party (CCP) launched a brutal persecution of Falun Gong. Ms. Yu went to the regime's Appeal Bureau in Beijing to appeal for justice for Falun Gong. However, she was illegally arrested and detained at the Qianmen Police Station. Her hands were cuffed behind her back such that the handcuffs cut into her flesh. Later, police from the Wansongyuan Police Department in the Jianghan District of Wuhan City took her back to Wuhan City. She was then sent to the Wuhan Women's Custodial Center, where she was detained for two weeks. 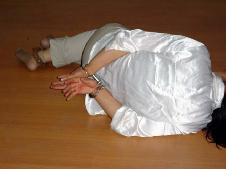 Torture re-enactment: cuffing behind the back

On February 20, 2000, the Jianghan District Police Department's 610 Office ordered all of the police officers to arrest Falun Gong practitioners on a large scale. Zhou Zhiwei, chief of the Wansongyuan Police Station, and many policemen, including Luo Yong and Tang Shuangxin, went to Ms. Yu's home, arrested her and detained her in the Jianghan District Brainwashing Center.

On February 9, 2001, Zhou led a group of policemen to break into Ms. Yu's home, handcuffed her, and then took her to the police station. Ms. Yu was sent to the Jianghan District Brainwashing Center again. She refused to watch videos that defamed Falun Gong and joined other detained practitioners to remove banners that slandered the spiritual practice. Practitioners also wrote words to clarify the facts about Falun Gong on the wall. The head of the 610 Office called in the police to investigate who had written these words. They ordered each practitioner to write down some words in order to compare their handwriting with the words written on the wall. Ms. Yu and the other practitioners, more than 10 of them, refused. In the end, the police were unable to identify the person who had written those words.

After escaping from the police station, Ms. Yu went to Beijing to clarify the facts about Falun Gong. She was arrested again and imprisoned in the Yanshan Detention Center for 17 days. She was released after starting a hunger strike to protest the persecution.

Ms. Yu Yimin was arrested for the sixth time when she was handing out materials to clarify the facts about Falun Gong. She was sentenced to one year of forced labor in the Hewan Drug Rehabilitation Center, serving as a forced labor camp, in Wuhan City. When she arrived there, the guards deprived her of sleep. They ordered several people to brainwash her with CCP propaganda around the clock. Ms. Yu ignored them. Then the guards incited the inmates to beat her, pinch her, and keep her awake for long periods of time. They also forced her to stand facing the wall or in a military-style squatting position for long periods. If she moved even a little, they would beat her severely. The guards also forced her to do manual labor for long hours. No matter how they tortured her, Ms. Yu Yimin always maintained her belief in Falun Gong. 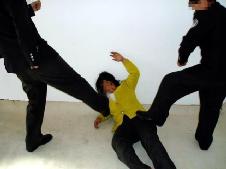 In November 2002, on the day when Ms. Yu's sentence was completed, the police transferred her from the labor camp to the Jianghan District Brainwashing Center, instead of releasing her. This was the third time that Ms. Yun was locked in a brainwashing center. In the center, Ms. Yu was injected with unknown drugs. Initially, she felt pain radiating from her feet. Gradually, she lost her memory, lost the feeling in her feet, and lost the capability to walk. The guards at the center also severely beat her and hit her head against a wall.

Torture re-enactment: hitting the head against a wall

Ms. Yu was released from the Jianghan District Brainwashing Center on January 31, 2003. Her body was weak and swollen from the tortures. Unable to cope with the pressure from the CCP and long-term persecution, her husband, Wang Siqing, asked her to sign divorce documents several days later, giving her enough money to cover her living expenses for one month.

As Ms. Yu had been dismissed from her workplace while she was imprisoned, she had no income or other means of support from that point on. Her family was thus torn apart and she became homeless. Because of the effects of the torture and injections with unknown drugs while in detention, as well as the pressure of being homeless and destitute, she had a mental breakdown in 2003. Later she developed great difficulties in walking and could only crawl on ground. She could no longer take care of her daily needs.

Two local Falun Gong practitioners wanted to help Ms. Yu recover. They took care of her, supported her financially and arranged for her to live in a welfare center. However, both of them were arrested by the CCP for their belief in Falun Gong and for helping a fellow practitioner.

Practitioner Yu Yimin from Wuhan City Lost Her Family and Was Reduced to Begging on the Streets Due to the Persecution
http://clearwisdom.net/html/articles/2006/1/22/69200.html
Category: Deaths