(Clearwisdom.net) Mr. Yang Kunmao and his wife Ms. Zhang Lizhu are from Hualian City, Taiwan, and are living a meaningful life. They have a son and a daughter. Kunmao works in an insurance company and Lizhu works in a water supply company.

In 1998, Lizhu's boss introduced Zhuan Falun to her. She and her husband read the book repeatedly. They also learned the five exercises. Initially, Lizhu was able to sit in the full-lotus position for half an hour. But Kunmao has really suffered a lot doing the meditation. His legs hurt so much that he could hardly bear it. Four months later the pain was less and he was able to meditate for an hour. 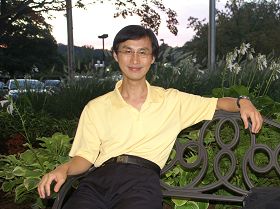 Cultivation practice improved the couple's physical and mental health. Kunmao used to be frustrated with his company's promotion policy. Since beginning cultivation he realized that he should let things happen naturally and is no longer attached to his career. Moreover, he has a better attitude toward his customers. He always listens to their points and every case has been well resolved. Many customers thank Kunmao for his help. Additionally, his boss speaks highly of his performance and gives him the privilege of determining the amount of compensation for the customers.

Kunmao feels that his mind became calmer since beginning cultivation; it is much easier for him to concentrate, so he can do things quickly and neatly. He is always the first one to submit the company development plan. His boss is very proud of him. About six years ago he was promoted to in-house executive.

Many people know that he practices Falun Gong and want to talk with him. This couple has practiced cultivation for 13 years. They look very young and most people would not guess by looking at them that they have two children in high school.

Since July 20, 1999, when the Chinese Communist Party launched a brutal persecution of Falun Gong and its practitioners in China, due to their children's young age then, they took turns going abroad to participate in activities to raise awareness about Falun Gong. They have been to Hong Kong and other places. Moreover, they tell Mainland Chinese people the facts of Falun Gong through fax, the mail, phone calls, and the Internet.

The couple are making great use of their abilities to tell more people the facts in order to bring the persecution to an end as soon as possible.