September 01, 2011 |   By a Clearwisdom correspondent from Heilongjiang Province, China

(Clearwisdom.net) Mr. Ci Hai developed liver ascites and other illnesses after enduring many years of mental and physical abuse by the Chinese Communist Party (CCP). He died in great pain on the evening of August 23, 2011 at the age of 39.

Mr. Ci Hai began to practice Falun Gong in 1994. He benefited both physically and mentally. He went to Beijing to appeal for Falun Gong and was sentenced to two years of forced labor. He was subjected to severe beatings, was hung up, and had his detention extended in the Fuyu County Forced Labor Camp. He was released in 2002, and was again arrested by the Tiefeng District police in March 2006. On December 5, 2006, he was sentenced to four years in prison by the Tiefeng District Court. He was transferred to the Tailai Prison on February 8, 2007.

The following is an account of the persecution that he endured:

On October 21, 2001, Mr. Ci and about 20 other practitioners were brutally beaten as they persisted in their belief in Falun Gong and resisted the persecution in the Fuyu Forced Labor Camp. The camp authorities sent several dozen of the criminal inmates from other wards and several dozen officers from the Criminal Brigade of the Fuyu County Police Department, a total of more than 60 people, to beat Mr. Ci and other practitioners. Some of the practitioners fainted, and some were bruised and bleeding. 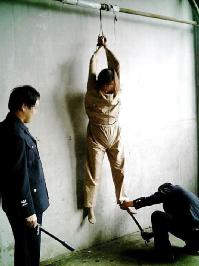 On April 20, 2002, Mr. Ci and several practitioners started hunger strikes to protest the persecution. The guards hung them from the upper level of the bunk beds and handcuffed their hands back to back so the hands and body couldn't move. They also verbally abused the practitioners. The practitioners were hung up for more than ten hours and for as many as 15 hours, from 6:00 a.m. to 9:00 p.m. per day. The guards set strict rules for restroom use. Due to the long periods of hanging and standing, the practitioners' legs and feet were swollen and they had difficulty walking. 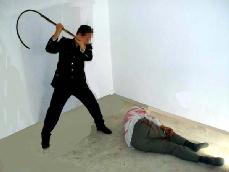 Mr. Ci's term was up on February 9, 2003, but the camp authorities did not release him. On February 20, Han Shaokun, the head of the ward, and guard Duan Lianrong severely beat him on the head and all over his body with belts. The belts broke in the end and left Mr. Ci's body mangled. The camp authorities extended Mr. Ci's term without following any legal procedures.

Mr. Ci was taken to the Tailai Prison on February 8, 2007. He was initially held in the fourth ward in the No. 4 Prison District. The prison started a new round of persecution from January to April in 2007. The Justice Department issued documents that stated all detained Falun Gong practitioners were to be “transformed” and the prison was to achieve a transformation rate of 100%, or the associated guards' bonuses and salaries would be deducted, as would their promotions. All practitioners were forced to attend meetings and listen to the doctrine given by a person who believed the false propaganda concocted by the Communist Party. Even the head of the Qiqihar City 610 Office attended the meeting.

Mr. Ci was locked in solitary confinement as he refused to “transform.” He was monitored by four criminal inmates. The inmates would beat him inhumanly if he ever said anything about Falun Gong. He was offered two meals a day, and each meal was just a little bit of cornmeal soup. There was no drinking water available, so he had to drink the water in the toilet and use that water for washing his face and brushing his teeth.

Mr. Ci was finally released in 2011 after four years of brutal torture. He no longer had a job and had no income. He was in a deep depression and developed liver ascites and other illnesses. He became emaciated and his complexion turned yellowish. He developed many pustules all over his body. The pustules burst and discharged pus. Mr. Ci died on the evening of August 23, 2011.