August 09, 2011 |   By a Clearwisdom correspondent from Hebei Province, China

(Clearwisdom.net) Ms. Zhang Yueqin, a Falun Gong practitioner from Tangshan City, Hebei Province, is being tortured in Hebei Province Women's Prison, after having been detained there for three years.

Some of the torture includes having needles inserted into her body, being deprived of sleep for days, and being forced to walk on scalding hot plates. In addition, guard Wu Hongxia, an instructor from cell No. 6, instigated others to slap Ms. Zhang's face until their wrists were in pain. Currently, Ms. Zhang hardly talks to anyone close to her. 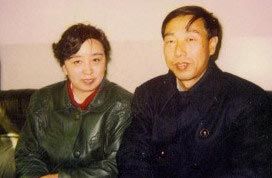 Ms. Zhang Yueqin (right) and her husband Mr. He Yixing

Ms. Zhang Yueqin and husband Mr. He Yixing are retired employees of the Tangshan Electrical Factory. They are honest and kind. However, simply because they are determined in believing in Falun Gong's principles of “Truthfulness-Compassion-Forbearance,” they have been severely persecuted by the Chinese Communist Party (CCP).

On the morning on July 10, 2008, under the direction of the Tangshan 610 Office and Public Security Bureau, a dozen plainclothes police officers from the National Security Team of the Lubei Public Security Bureau and the Diaoyutai Police Substation, led by team leader Chen Hong, broke into Mr. He and Ms. Zhang's home. They covered the peephole and pried open the door. They subsequently called in two fire trucks, using the lift to climb onto the six floor. They smashed the glass windows on both the north and south side, forced their way into the home, and arrested the elderly couple.

Later that same day, the Lubei Public Security Bureau also dispatched people to the workplace of He Yixing's second daughter He Yan and his second son-in-law Sun Fengli.

Without following any legal procedures and with no family present, National Security Team agents ransacked their home, even overturning the bed. They confiscated all of their valuables, including over 600,000 yuan that Mr. He Yixing's oldest daughter He Dan had borrowed, and a van that He Dan used to import goods. At the same time, they confiscated a vehicle that their second son-in-law parked at the factory.

On July 29, 2008, Xu Laisheng, deputy team leader of the Lubei National Security Team deceived He Dan into going to the Lubei Public Security Sub-bureau and detained her at the detention center for fifteen days. During the detention, the cases of He Yixing and Zhang Yueqin were returned by the Lubei Procuratorate several times, because according to regulations, the Lubei Public Security Bureau was not supposed to hand in the cases. However they collaborated with each other, and still submitted their cases to the Lubei Procuratorate. Ultimately, they charged the two seniors and their son-in-law with “using an evil organization to interfere with law enforcement.”

Six defense lawyers went several times to the Tangshan No. 1 Detention Center to meet He Yixing, Zhang Yueqin and Sun Fengli, but they were all denied entry. Tangshan Lubei Court had their court dates set for December 10 and 19. On December 19, the four lawyers for He Yixing and Zhang Yueqin went on strike to protest the unlawful actions by the Tangshan No. 1 Detention Center and the Lubei Court.

Zhang Yueqin's defense lawyer relayed what happened in court, saying, “When we were there, we saw our two clients in prisoners' suits, handcuffed behind the back. The court was very small, about a dozen square meters. Other than judge Zhang Xuefeng, there were about ten police officers in the courtroom, probably the court officers and police from the Public Security Bureau. The courtroom was packed. We could see our clients trying to reason with them.”

He Yixing's defense lawyer Han Zhiguang said, “We believed that what the Tangshan City No. 1 Detention Center did is illegal. This detention center is the most unreasonable and unlawful of detention centers. We believe that they do not have the basic knowledge or sense of the law. They used the excuse that it was instigated by their supervisors, severely violating our rights as lawyers.”

With the lawyer's and family's strong protest and complaints, and with the support of people inside and outside of China, the family secured their right to meet with their lawyers. The Tangshan Lubei Public Security Sub-bureau also returned the more than 600,000 yuan in cash and the two vehicles to their owners.

On December 5, 2008, Lubei Court again tried He Yixing and Zhang Yueqin. The four lawyers-- Li Heping, Han Zhiguang, Li Subin, and Wang Yajun-- listed all of the violations of the law by the Public Security Bureau, the Procuratorate, and the court. As a result, the trial ended up focusing on the CCP's judicial system. The Lubei Court was forced to take four recesses. Regardless, four days later Lubei Court announced the verdict. He Yixing, Zhang Yueqin, and Sun Fengli were sentenced to seven years, five years, and three years imprisonment, respectively.