August 08, 2011 |   By a Clearwisdom correspondent from Heilongjiang Province, China

(Clearwisdom.net) At approximately 7 a.m. on June 10, 2011, Mr. Jiao Lingyun, 49, from Jixian County, Shuangyashan City, Heilongjiang Province, was illegally arrested by over ten police officers under the direction of Wu Hua and Geng Zhendong from the Jixian County National Security Team. He was held at the Jixian County Detention Center. On the afternoon of July 8, 2011, he was persecuted to death at age 49. 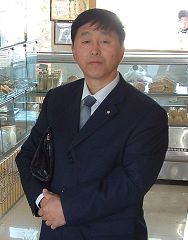 After the arrest, Mr. Jiao's 81-year-old father was terribly worried about his son. Accompanied by the top management of his son's employer, the Jianxin High School Dining Hall, he went to the Public Security Bureau and asked for permission to see his son. After they waited patiently for over two hours, police officer Wu Hua refused to let them see Mr. Jiao and threatened them. Mr. Jiao's father and employers had no choice but to leave.

Two weeks later, in the late afternoon of July 8, Mr. Jiao's father received a phone call from the Jixian County Public Security Bureau, informing him of his son's death. Mr. Jiao's family had not received any information about Mr. Jiao after his arrest until this phone call.

Mr. Jiao's family rushed to the hospital upon hearing the news of his death. At approximately 5 p.m., they saw his body. His limbs were rigid from rigor mortis and he was extremely thin. Darkly colored bruises were evident on his head, neck and legs. The skin around his mouth had deep pinch marks, his lips were injured and his clothes were wet. A dozen police officers surrounded his body. At approximately 6 p.m., officers escorted his body to the funeral home.

The detention center officials went to the hospital to obtain the death certificate. The hospital refused to issue this certificate, however, because the doctor had only been given permission to check Mr. Jiao's hands and feet, and was not allowed to check the rest of his body.

On the day after Mr. Jiao's death, his entire family gathered together and requested to see his body. The Jixian County Public Security Bureau agreed. On the morning of July 10, 2011, his family came to the funeral home. The police pushed Mr. Jiao's body into the reception hall. Dozens of police officers guarded the body and prohibited his family members from bringing any cell phones or bags. Mr. Jiao's whole body was covered and only his face was exposed. His family requested to see his whole body, but the chief of the Public Security Bureau did not allow it.

As Mr. Jiao had been healthy prior to his arrest, officials were trying to hide the circumstances surrounding his death, and some family members had noted many bruises on his body at the hospital right after his death, the family deduced that Mr. Jiao had been tortured to death at the detention center. Therefore, they went to the Jixian County Justice Bureau on July 11, 2011, to request a thorough investigation into Mr. Jiao's death and to file a lawsuit against the Jixian County Detention Center. When they arrived there, however, they were not allowed to enter. They spoke with a guard outside the bureau, who then spoke with the personnel inside about their intentions. The family was then informed that the bureau would not open the case and that they would not be allowed to enter the building.

Mr. Jiao's family hired an attorney to expose the Chinese Communist Party (CCP) officials' crimes and ensure that justice would be served.

On the morning of July 13, 2011, Mr. Jiao's family and their attorney were called by the Jixian County Public Security Bureau, the Procuratorate and the local court to the detention center for a meeting. The government officials who attended the meeting included Jixian County Detention Center chief Zhang Xinghua and deputy chief Wang Xudong, the CCP political commissar of the Public Security Bureau Ding Shuyou and deputy chief Wang Yuliang, and deputy chief of the Procuratorate Wang Zuojie. In the meeting, the officials admitted that the Public Security Bureau should take responsibility for Mr. Jiao's death, but none of the present officials took any responsibility for what had happened to Mr. Jiao, and they still did not inform the family about what had caused Mr. Jiao's death.

Before the attorney arrived at the meeting, Mr. Jiao's family members were shown a surveillance video that had nothing to do with Mr. Jiao's death. After the attorney arrived, the detention center officials played a 48-minute video related to Mr. Jiao's treatment at the center. However, it was obvious that this video had been edited and was made up of several unrelated videos spliced together. One part of the video showed four criminal detainees removing Mr. Jiao from his cell. His body appeared lifeless as the inmates held him up by his hands and feet. The next part of the video showed that after the criminals had gotten Mr. Jiao out of the cell, four police officers picked him up and lifted him into a police vehicle. The video only showed that Mr. Jiao was taken out of his cell and then out of the center, but did not show that he ever returned.

Mr. Jiao's family and their lawyer asked the detention center officials why the video was not continuous and why it did not show the specific events related to Mr. Jiao's death. Officials said that the video cameras were not able to record any of these events because of the way they were angled on the walls. In responding to questions about the nature of Mr. Jiao's death, Wang Yuliang from the Public Security Bureau and Zhang Xinghua from the detention center offered the following statement, “On the afternoon of July 8 at about 2 p.m., Jiao Lingyun drank some water. The police observed that his face turned pale and they sent him to the hospital. He died at 2:25 p.m.”

On July 17, 2011, an autopsy was performed on Mr. Jiao's body. It was found that his chest, lungs and bronchial tubes had accumulated water. Although he had never smoked, one of his lungs was black and full of blood.