(Clearwisdom.net) The ongoing UK tour of the Truthfulness-Compassion-Forbearance International Art Exhibition retuned to the renowned university city of Cambridge in August. The two-week exhibition is being hosted in the City Hall in the centre of Cambridge. On the evening of August 15, 2011, the organisers held an opening ceremony for the Truthfulness-Compassion-Forbearance Art Exhibition. The Mayor of Cambridge, Mr. Ian Nimmo-Smith, and a number of distinguished guests attended the ceremony. 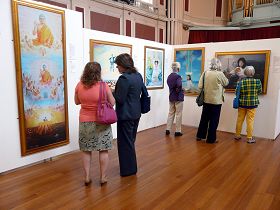 Mayor Nimmo-Smith carefully viewed each artwork at the exhibition. He said that he greatly appreciated the artists and paintings on display. He said, “I am deeply impressed by the lights and colours displayed in the artworks as well as the sincerity of the artists. The artists used their own feelings to demonstrate the universal values of their faith.” 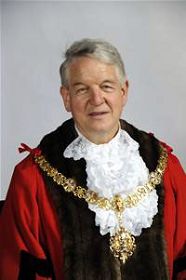 The Mayor had high praise for the exhibition. He also said that he hoped that more people would come to see the exhibition, to learn about Falun Gong and the persecution in China. He said, “I hope that everyone will think about how to change the situation regarding the persecution of Falun Gong in China. I hope that everyone will come to see these paintings, to discover and appreciate the message of peace and truth.”

Professor Alison Liebling, Professor of Criminology and Criminal Justice, was invited to the opening ceremony and made a short speech. She felt that it was an honour to open the ceremony for the Truthfulness-Compassion-Forbearance Art Exhibition. She said that this exhibition drew her attention to the issue of the Chinese Communist regime's persecution of Falun Gong. Profession Leibling said, “This exhibition attracted my attention to this issue. I had already started doing some research in this area. The exhibition is very moving and achieved a very strong purpose. The name of the exhibition, Truthfulness-Compassion-Forbearance, is very meaningful, forming a strong contrast with the [persecution]. It depicts clearly the brutal persecution that shows no tolerance. I have no doubt that the exhibition will raise people's attention to the sufferings of the detained Falun Gong practitioners in [Chinese] prisons.”

Ms Zhou, a Falun Gong practitioner currently residing in Cambridge, suffered persecution in China. She also made a speech at the opening ceremony and told the audience that because of her belief in Truthfulness-Compassion-Forbearance, she was arrested in Beijing and illegally detained in a labour camp where she was subjected to physical and mental torture. Ms Zhou's experience deeply moved Ms. Denise Schenu, a visitor to the exhibition. After Ms Zhou's speech, Ms. Schenu quickly found Ms Zhou and praised her for the courage to stand up and speak out about her persecution experience.

Many visitors expressed their appreciation for the brilliant colours and light qualities used in the artworks. They said that the inner meaning and message expressed in the paintings have far-reaching significance. Some people had just heard about Falun Gong and the brutal persecution of Falun Gong practitioners in China for the first time. They were deeply shocked by the scenes of persecution depicted in the paintings and felt the strength and hope of compassion of the Falun Gong practitioners.

Young and lively Alexandra Craben is a student at Cambridge University. She loves writing and hopes to become a professional writer. That evening she happened to pass through City Hall and heard about the Truthfulness-Compassion-Forbearance Art Exhibition. She decided to have a look. She said that she learned many things from this exhibition. Ms. Craben said, “I now have some understanding about Falun Gong. I had never heard of it before. I also have a better understanding of the ongoing reality in China. It is very meaningful to learn this because it can draw people's attention to the reality.”

Ms. Craben felt that these artworks were very beautiful. She added, “The way these artworks depict the life of ordinary people is the strength of this exhibition. This method really helped me to connect to the struggle and suffering of humankind.”

Since the start of the world tour in 2004, the Truthfulness-Compassion-Forbearance International Art Exhibition has visited Cambridge many times. The current exhibition at City Hall will continue for two weeks and will end on August 29, 2011.