August 10, 2011 |   By a Clearwisdom correspondent from Tianjin, China

(Clearwisdom.net) Mr. Li Xiwang from the Hebei District, Tianjin is a factory owner. He and his wife Chen Liyan were illegally arrested on December 21, 2010. After being held in the Hexi Detention Center for more than six months, Mr. Li was transferred to the Gangbei Prison (the name has been changed to the Binhai Prison). He died recently as a result of the persecution.

On the morning of July 29, two police officers came to Mr. Li's home and declared that Mr. Li “had died of sudden illness after an emergency treatment failed to save him” in the early morning hours that same day. Mr. Li's wife Ms. Chen Liyan was subjected to a one-year forced labor term, and is being held in the Banqiao Women's Forced Labor Camp in Tianjin.

At noon on July 29, Mr. Li's relatives went to the Gangbei Prison, saw his remains and learned about the cause of his death. The family asked the prison officials to show them the video, and the officials replied that the Prison Bureau had sealed his record. The next day, the family was able to watch the video, but it was not clear. Mr. Li's family is negotiating with the prison, and the prison officials said that they would try to get Ms. Chen Liyan released early.

Mr. Li was sentenced to eight years in prison because he practices Falun Dafa. He was detained in the Gangbei Prison, where he was brutally tortured. The guards handcuffed his hands to a pole and forced him to face the ground. They put very heavy shackles on his feet and tied his feet to two poles. One foot was tied at a higher position than the other. He was tortured this way for 28 days. When Mr. Li's hands and legs were untied from the poles, they did not expect him to still be alive. Mr. Li was also confined in a small cell of about nine square feet alone for more than a year. There is no window in the cell and only had a small door used for passing meals. He slept and relieved himself in the same cell.

Mr. Li Xiwang and his wife Ms. Chen Liyan were illegally arrested at around 10 a.m. on December 21, 2010, in front of their home by officers from the Dayingmen Police Station in the Hexi District. The couple was taken to the Hexi Detention Center. The police ransacked their home and factory, and confiscated their personal property. The police confiscated about 5,000 yuan and three cellphones that the couple was carrying. The police also confiscated their van. At the same time, the police stormed onto the fifteenth floor of the Sanyi Building in the Hexi District and confiscated about 500 yuan from Mr. Li’s 15-year-old son. Mr. Li's factory, which is located in Minquanmen, Hebei District, was also broken into, and the police confiscated two cell phones, three computers, two printers and other items.

Mr. Li's older brother was sentenced to ten years in prison for practicing Falun Gong, and is still being held in the Gangbei Prison in Tianjin. Mr. Li's family has no source of income, and life is very difficult. Mr. Li’s child and his mother-in-law are left uncared for. 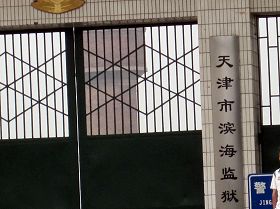 Gangbei Prison in Tianjin was renamed to “Binhai Prison”