July 28, 2011 |   By a Clearwisdom correspondent from Liaoning Province

(Clearwisdom.net) Mr. Wu Zhongming was a retired military official from Dalian City. He and his wife started practicing Falun Gong in July 1994. His osteoarthritis then disappeared, and his physical condition became better and better. His family enjoyed a very happy life.

After the communist regime launched the persecution on July 20, 1999, Mr. Wu not only had long-term fear while facing threats and harassment from the police, but also experienced great mental torment. He developed a fever and lost consciousness on May 4, 2004 and was sent to the hospital for emergency care. He became paralyzed, and his family had to take care of him. Mr. Wu died on the evening of January 26, 2011, at the age of 81. 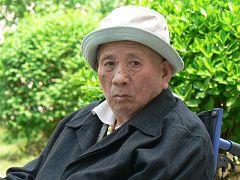 After the April 25, 1999 Appeal, local police officials often came to the Wu family's home to interrogate them because Mr. Wu and his wife practiced Falun Gong. His wife was also the assistant at a practice site. Especially after July 20, 1999, the police never stopped coming to their home. Party secretary Yu from the Hutan Neighborhood Office led officers to harass them several times. Later on, Yu even led officers from the City Human Resource Department and the Women's Association and Residential Committee frequently to their home and tried to force them to give up Falun Gong. At one time, Yu shouted in front of many people at their home that if they didn't stop practicing Falun Gong he would “send them someplace.”

Leaders from the Retired Officials Sanatorium also urged Mr. Wu to renounce Falun Gong. When it came to the so-called sensitive dates, local police officials and Residential Committee representatives often made people stay close to home and monitored their activities. Frequently these individuals also harassed them. Mr. Wu became nervous when he heard someone knocking on his door, even when his own children were returning home. The entire family lived under great mental stress for a very long time.

Police officer Lin and six or seven others from the Zhongnanlu Police Station broke into Mr. Wu's home and ransacked it at 6:00 p.m. on April 12, 2002. They searched all over and took several hundred pictures with the Falun Emblem, two sets of exercise suits, four meditation mats, a tape recorder, two copies of truth-clarifying materials and a passport. Originally, the police took the older couple to the police car to detain them. But after Mr. Wu's wife strongly reasoned with them they released Mr. Wu. Several days later, they returned the tape recorder to him. It was eventually learned that close to the anniversary of the April 25 Appeal, police department officials demanded local stations to arrest and detain a certain number of practitioners. To reach the quota, the officers ransacked Mr. Wu's home and arrested his wife. She was held at a detention center for 15 days. Mr. Wu was worried while she was away and he couldn't sleep or eat well.

On April 26, 2004, police officer Gao, who was just transferred to the Zhongnanlu Police Station, visited Mr. Wu and his wife at home. Gao asked the couple if they were still practicing Falun Gong. He listed some incidents where practitioners were subjected to brutal torture and persecution in a forced labor camp. After Gao left Mr. Wu was frightened. The fear that had accumulated in his mind from countless harassments and threats in the past five years finally exploded. Mr. Wu lost consciousness after developing a high fever on May 4, 2004. As stated above, following hospital emergency care he became paralyzed. His weight dropped from 176 pounds to 132 pounds. He became bedridden for the next three months and was taken to the hospital for emergency care twice more.

Mr. Wu's paralysis lasted six years plus, making him unable to care for himself. He became completely dependent on his family. He suffered mentally and physically. His family has lived in an extremely depressed environment since the persecution. With great grief and sadness, Mr. Wu died on the evening of January 26, 2011.