Ireland: Falun Gong Practitioners in Dublin Host a Rally and Parade to Protest the Persecution

(Clearwisdom) On July 16, 2011, Falun Gong practitioners in Ireland rallied and paraded in Dublin, calling for an end to the persecution of Falun Gong that begin in China on July 20, 1999. The activity was actively supported by people from all walks of life. Participants condemned the Chinese Communist Party's brutal persecution and called for worldwide awareness to help end it at once. 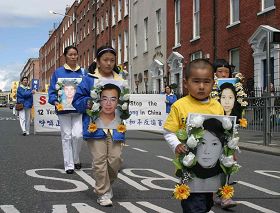