Washington DC: March of More Than 2,000 Falun Gong Practitioners Calls for an End to the Persecution (Photos)

(Clearwisdom.net) About 2,500 practitioners from Europe, the U.S., Asia, Australia and other areas held a grand march and rally at noon on July 15, 2011 in Washington DC, to call for people from all walks of life to work together to put an end to the Chinese Communist Party's 12-year persecution of Falun Gong.

At noon, numerous banners and placards conveying messages such as “Falun Dafa Is Great,” “The World Needs Truthfulness-Compassion-Forbearance,” and “Stop Persecuting Falun Gong” reappeared on the spacious Pennsylvania Avenue in Washington DC. The nearly two-hour march began at the Washington Monument and ended at Farragut Square. The entire route was two miles. 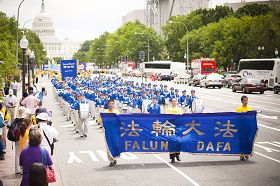 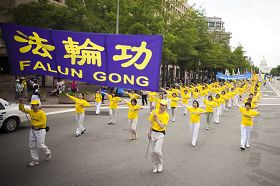 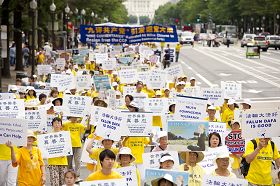 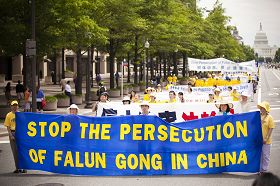 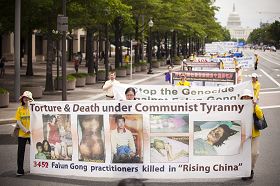 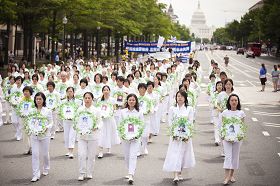 Commemorating practitioners who have died as a result of the persecution 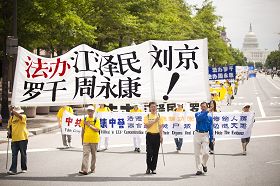 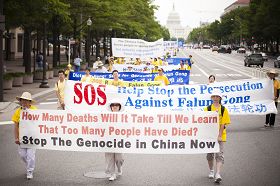 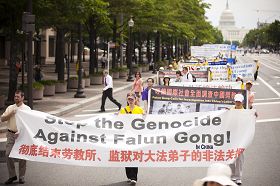 Many passersby stopped to watch the march. Some of them said that each year they have seen a large number of Falun Gong practitioners hold activities in DC, and that they felt this year's march was particularly impressive. Others echoed the need for the persecution of Falun Gong to end immediately.

Ouyang has been in the U.S. for seven years, and learned about Falun Gong from his wife, a Falun Gong practitioner. He said that he accompanied her from New York to participate in the march in DC. “I think the persecution must be serious, otherwise, nobody would have come from so far to take part in this grand march.”

Ms. Yang from China said that she was moved to see the march. She had heard about the persecution when she was in China, but didn't know that it was so cruel. “The messages on these banners are very powerful--I want to cry when I look at them.” She said that she also saw practitioners' perseverance from the march. 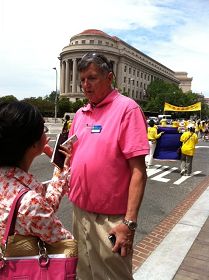 Vince Careatti said that everybody should learn about the persecution

Resident Vince Careatti said that he has been to China, and learned about the CCP's brutality towards Falun Gong practitioners. The regime has arbitrarily arrested and physically abused and tortured practitioners, and even went so far as harvesting organs from living practitioners. He expressed his indignation towards the appalling atrocities of torture and abuse of practitioners, and the live organ harvesting. He mentioned that various channels should be used, such as the Internet, Twitter, and Facebook, to let everybody learn about the persecution so that it can be stopped soon.

A director of a company on Pennsylvania Avenue said, “I'll call my congressman, asking him to support Falun Gong, and help stop the persecution.”

Grateful for Falun Dafa, a Korean couple comes to DC to call for an end to the persecution

A Korean couple, in their 60s, began practicing Falun Gong in March 2011. Before that time, the wife suffered from diabetes, and the husband had been diagnosed with colon cancer. After they practiced Falun Gong for less than one month, all of their symptoms disappeared.

The wife said, “We flew 17 hours to come to the U.S., hoping to have an opportunity to extend our Korean people's sincerest regards to Master Li, and to express our gratitude.”

“We have found the best practice in the world, and we hope that others can learn it too, so we have also come here to do our part in stopping the persecution.”

Another Korean practitioner has been practicing Falun Gong for nearly six years. She said, “I feel happy and fortunate, as I have found a true and great practice.”

“We can practice freely, but our fellow practitioners in China are suffering brutal persecution, so my heart is very heavy,” she said. “I've traveled from far away to come here to participate in these activities, and I hope the persecution will soon end. I believe it's not far from the day when all practitioners around the world will be able to get together.”

Ms. Luo from Belgium started practicing in 1998, ptior to the beginning of the persecution. She said before that time, she was almost paralyzed, and could not even hold up chopsticks. She then saw Falun Gong being promoted at an event held at the Chinese Embassy. She regained her health soon after practicing Falun Gong.

She has been to DC five times now to take part in the large-scale activities. This year in the procession she carried a portrait of a practitioner who had died as a result of the persecution. She said, “I feel the persecution really can't go on anymore.”