(Clearwisdom.net) Whenever I think of Master’s immense mercy and infinite grace, I am always full of gratitude that cannot be expressed in words. Today I’d like to share some of the miraculous things I have experienced to validate the miracle of Dafa.

After I began practicing Falun Dafa in 1998, all my illnesses, such as rheumatoid disease, heart disease, bleeding in the eye, and cerebral vascular insufficiency, disappeared in about two months. Master purified my body and let me reach a state free of illness. Besides the miraculous healing power, I have also experienced other miracles of Dafa.

Teething in My 50s

I’m 54 this year. In 2001, I managed to escape from the Heizuizi Women’s Forced Labor Camp in Changchun City. Soon after I returned home, the filling that had repaired my decayed tooth decades before disappeared, exposing a hole in my tooth and causing me much trouble when I ate. Then I thought, “It would be nice if a new tooth grew and filled in the hole.” Several days later, I surprisingly found a small, new tooth in the hole. It surfaced very quickly and soon filled in the entire hole. The bad tooth was afterward replaced with the new one. 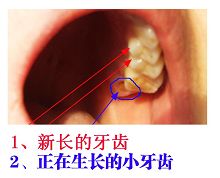 After that, whenever an old tooth fell out, a new one quickly appeared. So far I have six new teeth. Once a new tooth grew in, but it wasn't the correct shape. It had an extra tip on the top that faced outward like a point. I said to this tooth, “Everything of Dafa disciples is righteous. You formed in an incorrect shape and that’s not acceptable. You need to rectify yourself.” The following day, to my surprise, the extra part on the top had disappeared. The tooth was completely normal.

I shared my experience of “teething” with an older woman. She thought it quite miraculous and afterwards began to study Master’s teachings.

I was illegally arrested at a material production site in 2006 and then detained in a local detention center. In order to resist the persecution, I went on a hunger strike and ended up in critical condition many days later. One day, a guard brutally beat me and kicked me in the pit of my stomach. After her second kick, I felt severe pain and had difficulty breathing. An inmate was scared by my condition, asking, “Are you OK? Kicking someone like that can easily cause death.”

At that very moment, I sent out a firm thought in my heart, “Let the severe pain be transferred onto the guard’s body!” A miracle happened immediately and all the pain at once disappeared. I fell asleep comfortably and slept very well. The next day I felt very good, as if I had never been kicked.

Last year, I couldn’t connect my computer to the Internet for quite a while. No matter how I tried, I couldn’t access the Internet. One Friday morning, I gave it a last try, thinking that if it still didn’t work, I would go to another practitioner’s home to use the Internet. Unexpectedly, I successfully logged on without any trouble. As a result, I canceled my trip to the practitioner’s home. Later, I heard that the practitioner I had planned to visit was arrested at home that same day and his home was ransacked.

Afterwards, it turned out that that was the only day that I was able to log onto the Internet. After that day, no matter how hard I tried, I still couldn’t log on. When I eventually contacted the network company, I found out that the password I was using was incorrect. Putting all the events together, I realized that it was because of Master’s protection that I was able to access the Internet that day, even with an incorrect password, and thereby escaped arrest.

Everything of mine was granted to me by Dafa. I have personally experienced and witnessed how Master saved me and provided salvation. I cannot repay Master’s immense mercy and infinite grace. Only by striving forward diligently and doing well on the three things can I live up to Master’s expectations.