Mr. Chen Xin Has Been Denied Visitation Rights for Over Two Years (Photos)

June 21, 2011 |   By a Clearwisdom correspondent from Liaoning Province, China

(Clearwisdom.net) Mr. Chen Xin, 42, was repeatedly harassed when the Chinese Communist Party began the persecution of Falun Gong on July 20, 1999. He was arrested for appealing in front of the city government building on July 22, 1999. Officers handcuffed him to a heating pipe in the police station and did not give him any food or water for a whole day. Mr. Chen's boss was called to the station and was forced to fire him there and then.

On April 20, 2000, officers from the Sha District Police Department arrested Mr. Chen on his way to appeal in Beijing. He was detained at the Dalian Drug Rehabilitation Center for over three weeks and fined more than 2,000 yuan.

Officers from the Paoyan Police Station frequently went to Mr. Chen's home to harass his family, which lasted for more than four months. Mr. Chen's son was less than 6 months old at the time. 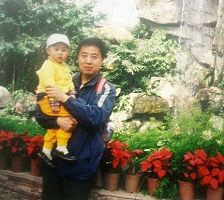 Liu, the head of Paoya Police Station; political head Zhang Wei; officer Zhou Lianyuan; and half a dozen other officers went to Mr. Chen's home at around midnight on April 24, 2001, and ordered him to go with them. Mr. Chen and his wife ignored them and continued to bathe their son. There were several other family members at home, so the officers just waited. Mr. Chen was subsequently able to escape.

Mr. Chen had to stay away from his home to avoid persecution. He was constantly on the move. When he got a job one time, he found out that he was being followed and had to leave the job immediately.

On April 27, 2002, Mr. Chen and another practitioner, Mr. Xu Zhibin, were arrested by the head of the Malan Police Station, Gao Qiang; an officer from the Shahe District Domestic Security Division, Liu Bin; head of the division Sheng Xuguang; and more than 20 other officers. They confiscated the computers that Mr. Chen was repairing for others.

Mr. Chen was illegally sentenced to 13 years in prison on September 28, 2002. He was first held in Wafangdian Prison on April 23, 2002, then in the Jinzhou Prison on December 19, 2007. The prison administration has denied his family's requests to visit him since April 17, 2009, claiming that the 610 Office prohibits family visits.

Practitioners in the prison have been forced to do hard labor since March 2011, and anyone who refuses undergoes more severe persecution and brainwashing. It has been said that Mr. Chen is being persecuted severely there, and his family is deeply concerned about him.