(Clearwisdom.net) Ossur Skarphedinsson, Minister of Foreign Affairs, recently apologized on behalf of the Icelandic Government for the treatment that Falun Gong practitioners endured in relation with the Chinese president's visit to Iceland in the summer of 2002. 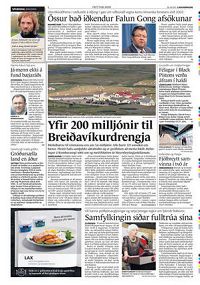 Fréttablaðið, the largest newspaper in Iceland, reports on Skarphedinsson's apology.

The apology came from the speech chair of Althingi after an inquiry from Margret Tryggvadottir, an MP for Hreyfingin.

She included among other things in her speech: “The Icelandic Government violated these people's human rights, freedom of speech and expression, and the freedom to travel, and both The Data Protection Authority and Ombudsman of Althingi have concluded that the law was violated against those guests of ours.”

She then asked whether it was not timely to formally apologize to the individuals involved.

Mr. Skarphedinsson said that it was clear that these kinds of things would not repeat themselves while this government was in office. He said: “I can, on behalf of the Icelandic Government, here from this chair, ask those that came here at that time and whose rights were violated to accept an apology.”

Margret welcomed these words by Mr. Skarphedinsson, but urged the government to make an official apology.

On the day when Jiang arrived, 450 parliament members and noted public figures acted together and published four full-page advertisements in the biggest newspaper in Iceland, Morgunbladid, to apologize to Falun Gong practitioners. The advertisements used three Chinese words meaning "apology" as the title, while the English title was "WE APOLOGIZE!"

The advertisement said: “We the undersigned -- common Icelandic citizens -- apologize to members of Falun Gong and other foreign visitors of Asiatic origin for the incomprehensible actions of the Icelandic authorities in connection with the state visit of the president of the People's Republic of China to Iceland.

We assure you that these actions are not in accordance with the wishes of the Icelandic people.

We furthermore strongly condemn the severe human rights violations of the Beijing tyranny on the Chinese mainland as well as China's occupied areas.” 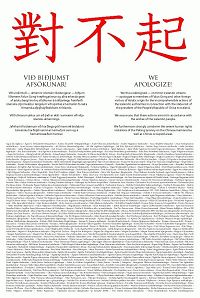 The advertisement on Morgunbladid

Around three thousand people held a large-scale assembly and protest in the Icelandic capital. They held up pro-Falun Gong banners and sealed their mouths with black tape to express symbolically that the Icelandic government had violated the people's will, and that they were dissatisfied with the government's mistreatment of Falun Gong.

During his stay in Iceland, Jiang still could not avoid facing Falun Gong practitioners' peaceful protests, and also faced several demonstrations held by the Icelandic people.