(Clearwisdom.net) On May 20-22, 2011, Florence hosted the seventh annual Terra Futura, one of the main expos in Europe on social, economic, and environmental sustainability. The event attracts about 90,000 visitors every year. Italian Falun Gong practitioners participated by giving out materials, setting up a booth, demonstrating and teaching the exercises, and collecting signatures for a petition to put an end to the ongoing persecution of Falun Gong practitioners in China by the Communist regime. Hundreds of people signed the petition and thanked practitioners for letting them know about the real situation of Falun Gong.

Practitioners also exhibited the “Truthfulness-Compassion-Tolerance International Art Exhibition,” comprised of artworks by Falun Gong practitioners who are professional artists. The artists made use of their capabilities to expose the beauty of the practice, to show the terrible human rights abuses suffered by Falun Gong practitioners in China, and to call attention to the peaceful resistance to the persecution both inside and outside of China. The art exhibition has been shown in over 200 cities around the world. The beauty of the paintings, realized with traditional techniques, from the East and the West, attracted many visitors at the expo. Among them was a young Chinese man who spoke English, and spent a long time at the exhibition, talking with a practitioner about the situation in China. Like many Chinese people, he had some misunderstandings about Falun Gong due to the slanderous propaganda spread by the Chinese Communist Party (CCP) over the years. In the end, the young man thanked the practitioner for helping him understand the truth.

A gentleman from Brazil started crying after viewing the painting “A tragedy in China,” which depicts the death of a Falun Gong practitioner who refused to give up his faith in the face of torture. The gentleman said that he had the feeling that all the different tribulations he experienced in his life made him able to understand and feel the deeper meaning of the painting.

An older man from Florence said he already knew about the persecution of Falun Gong practitioners in China from a newspaper article. He said that he knew that the CCP was an evil regime, and that Falun Dafa was certainly a very good practice.

Practitioners were interviewed by a radio station which specializes in human rights, “Radio Nigrizia,” and by SKY Television. They spoke briefly about their personal experiences related to physical and moral improvements from practicing Falun Gong, then described the human rights crisis happening in China since 1999. Members of Amnesty International, also present at the expo, talked to practitioners, inviting them to participate at the activity organized for celebrating the fiftieth anniversary of Amnesty International, and to further expose the persecution of Falun Gong in China.

Friday afternoon, practitioners demonstrated the five exercises in an area set up by expo organizers. They dressed in traditional Chinese exercise costumes and played the exercise music, which attracted people to see the activity. Two young girls, Sofia and Viola, liked the exercises, so they went to see the art exhibition. They wanted to try the exercises on the spot. Like them, dozens of people tried the exercises over the three days, while many others asked for information about practice sites in Florence and elsewhere in Italy. 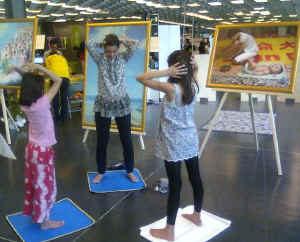