May 17, 2011 |   By a Clearwisdom correspondent in Heilongjiang Province, China

(Clearwisdom.net) Falun Gong practitioner Mr. Qin Yueming was persecuted to death in Jiamusi Prison on February 26, 2011. On the afternoon of February 27, his family was allowed to view his body after repeated requests. They discovered that his lips were bruised, and when his body was turned over, a great deal of blood poured out from his mouth and nose. His neck, back, waist and legs were also bruised and scarred. Mr. Qin's family filed a complaint and request for compensation with the Jiamusi Hejiang Procuratorate on March 26 regarding his death. The Hejiang Procuratorate failed to take action, so the family submitted a letter of complaint to the Jiamusi People's Procuratorate on April 20, but were suspicious that the officials were protecting each other. Meanwhile, Mr. Qin's family submitted a “Criminal Compensation Requisition” to Jiamusi Prison officials on April 19.

Photo of Qin Yueming prior to his death 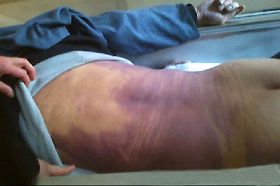 While waiting for the establishment of the case, Mr. Qin's family met several times with Tang Jiazhen, chief prosecutor of the Jiamusi Hejiang Procuratorate, hoping that the prosecutor's department would fulfill its responsibility by verifying the real cause of death, and apprehending the suspects. However, Tang Jiazhen attempted to influence the family to settle the matter privately with prison officials, thereby covering up the truth. His family insisted on going through legal procedures, so Tang Jiazhen stated that they had investigated the case, and that prison personnel did not mistreat Mr. Qin. His family subsequently complained about the unlawful actions of the Hejiang Procuratorate to the Jiamusi Procuratorate. As they talked with Jiamusi Procuratorate officials, a staff member named Sui acted aggressively towards the family; his behavior became restrained once the family asked for his name and said that they would report his behavior. Finally, he agreed to accept the letter of complaint and passed it to his supervisor, who refused to provide proof of the acceptance.

After Mr. Qin Yueming's family submitted the "Criminal Compensation Requisition" to Jiamusi Prison officials, various personnel in contact with the case read the document, but pushed it away citing several excuses. After several phone conversations between the family and warden Ye Feng, the prison political section staff accepted the legal document, but did not stamp it with the official Jiamusi Prison seal, and did not acknowledge the date of receipt.

The letter of complaint requests that the Heilongjiang Province People's Procuratorate order the Jiamusi Hejiang District People's Procuratorate to place the case on file, and to investigate the suspicious death of Qin Yueming and the personnel involved, including: Yu Yifeng, Shen Qingxin, Xu Liang, Du Yan and Liu Miaosen for misconduct, abuse of prisoners, and murder.

No Signs of Life, No Medical Specialist, Guard Unconcerned

The letter of complaint states: “The complainants' last visit was in March 2010, and they observed Mr. Qin in normal physical condition.” [....] “Qin Yueming also said that he felt fine, and was not ill.” [....] “From the video clip provided by the prison, Mr. Qin showed no signs of life while being taken to the clinic. The footage showed a prisoner carrying Mr. Qin to the clinic, his feet hanging limp, and no reaction from his body.”

The letter also states, “Throughout the process at the clinic, no doctors or medical specialists were present, and no medical equipment was brought in. The guard in the room had his hands in his coat pockets, and paced back and forth several times, unconcerned. The prisoner in the room held his hands behind his back, standing in the assigned position.”

The letter of complaint also points out that when the family went to the prison on February 27 after his death, they requested to view the video recording of Mr. Qin in the intensive training center from February 21, until his death. Yu Yifeng, chief of the intensive training center, agreed, but didn't show it to them immediately. After the family saw Mr. Qin Yueming's remains, they again requested to view the footage. Yu Yifeng claimed that he didn't have the authority to provide the video, and needed to ask his supervisor for instructions; moreover, he could only provide footage from the time that Mr. Qin became ill until his death. The family immediately asked, “[If there is something incriminating], will the footage of before he became ill go missing, too?” Yu Yifeng replied: “Nobody would dare to lose it!” When the family went to the prison on March 3, they again requested the footage of the victim prior to his becoming ill until his death, but Liu Xilin, chief of the prison political section, said that this wasn't allowed according to prison rules. On March 11, prison political section chief Cui and Shen Qingxin stated that the footage was lost.

The letter of complaint described the condition of Qin Yueming's remains: “The victim's lips were bruised, and when his body was turned over, a great deal of blood poured out from his mouth and nose; his body was also scarred.” His family tried to take photos of the remains, but were prevented from doing so at that time by the prison guard, who cited prison rules as an excuse.

“On March 3, the complainants visited the prison again to view Qin Yueming's remains, and saw that the bed sheet with blood stains had been changed, and that the bruises on his back and legs showed signs of having been treated.”

Prison officials refused to provide written documents with an official stamp or signature, citing internal rules. The family asked them to identify the rules, and prison political section chief Liu Xibo (last police number digits: 6332) said that the family was unqualified to receive that information. While the family was in Jiamusi, they were repeatedly followed, harassed, and intimidated by the police.

Police Give a Contradictory Explanation

Another excerpt of the complaint states: “Prison intensive training center staff member Shen Qingxin explained to the complainant on behalf of the prison, that at 5:30 p.m. on February 26, while patrolling officer Li Hong of the intensive training center was in the corridor, Qin Yueming said that he felt ill, and requested a medical examination for the next day. By 5:50 p.m., he felt pressure in his chest and began to go into spasms. At 5:55 p.m. when the doctor checked him, he had no heartbeat and wasn't breathing, and died suddenly. He was pronounced dead at 6:30 p.m. When one of the complainants later went up to Li Hong, Li firmly denied that Mr. Qin had requested an examination. Li told the complainant that when he patrolled the corridor, Mr. Qin only said four words: 'A bit tired... stop.'” The meaning of this phrase isn't clear.

Additional reports on Mr. Qin Yueming can be found at