(Clearwisdom.net) On April 25, 2011, Falun Gong practitioners in Toronto, Canada held a candlelight vigil in front of the Chinese Consulate to commemorate the April 25 appeal in Beijing twelve years ago, and to honor the many practitioners who were tortured to death over the past 12 years. 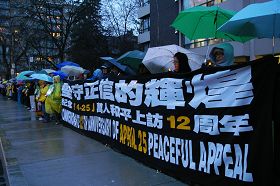 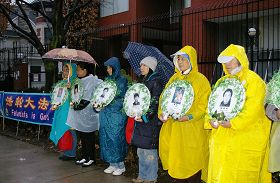 On April 25, 2011, Falun Gong practitioners in Toronto, Canada held a candlelight vigil in front of the Chinese Consulate to commemorate the 12th anniversary of the April 25 appeal

It rained continuously, yet more than 200 practitioners stood in the rain quietly and solemnly.

Practitioner Ms. Jinju Wang and her six family members participated in the April 25 appeal in Beijing. She said she was impressed with the peaceful appeal, and that she recalls the events of the day vividly.

After the Chinese Communist Party (CCP) began the official campaign of persecution of Falun Gong, Ms. Wang began to explain the facts about Falun Gong and the persecution to others. She went to appeal on Tiananmen Square twice and was arrested three times for clarifying the truth before leaving China.

She said, “I was not afraid because I knew that I was doing the right thing. They came to arrest me, but I did not fear.”

After coming to Canada, she kept explaining the facts to people. She said, “Every person, every family, even all of society can benefit from Truth-Compassion-Forbearance.”

Practitioner Yubin Gui said while holding a portrait of practitioner Yang Xueqin, “I learned Falun Gong from him. He was an assistant of the practice site at Shanghai Transportation University 12 years ago. He was arrested after appealing in July 1999. He was imprisoned in a mental hospital for three months. He was arrested again in February 2000 when he went to Beijing to appeal. He died the morning after police officers interrogated and beat him throughout the night on February 24.”

Mr. Gui said that he went to Beijing with Mr. Yang in February 2000, “I did not bring enough money. I borrowed money from him to buy train ticket. I have no chance to return the money to him, nor will I see my friend again.”

Another practitioner Mr. Li was an undergraduate student in Beijing in 1999. On April 25, he joined the peaceful appeal around 5 o'clock in the morning. “In the afternoon, I heard that practitioners who participated in the dialogue with the government coming out. I wanted to take a closer look, but did not move as walking around might cause obstruction,” said Mr. Li

The peaceful appeal lasted more than 10 hours. Practitioners left peacefully at night after being told that the issue was resolved and that the fellow practitioners arrested in Tianjin would be released.