(Clearwisdom.net) In order to commemorate the 12th anniversary of the April 25 appeal, practitioners in Spain peacefully protested the persecution of Falun Gong by the Chinese Communist Party (CCP) in front the Chinese Embassy on April 16 and April 23, 2011. 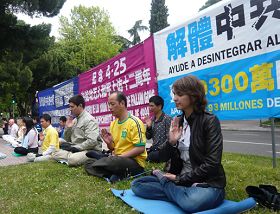 Practitioners in Spain commemorated the April 25 appeal and peacefully protested the persecution in front of the Chinese Embassy on April 16, 2011 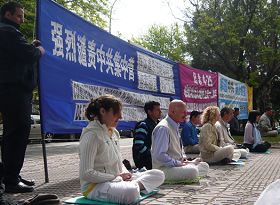 On April 16, practitioners held banners on the center island in the street opposite the Chinese Embassy. They exposed the CCP's atrocities committed in the 12-year-long persecution of Falun Gong practitioners, and called upon people to work together to stop the persecution. Practitioners also called upon embassy staff to learn the facts, not assist the tyrant to do evil, and to quit the CCP organizations soon in order to ensure a safe future for themselves.

A man who lives near the Chinese Embassy took a flyer and said, “I've known that the CCP is a very violent autocratic regime. Since the Tiananmen Massacre, I've seen different groups protest here for their human rights.” He added, “To let people know the truth and uphold justice, what you've done is great.”

An elderly man passing by read the words, “Truthfulness-Compassion-Forbearance” on a flyer and said emotionally, “The morality of modern society is becoming more and more corrupted; the world truly needs to have a moral transformation.”

A young man from Syria passed by and learned the facts. He said, “I haven't heard about the persecution of Falun Gong before, but it is completely unreasonable to persecute people who only want to be better people. What can I do to help you?” Practitioners pointed at the website on the flyer and told him, “Tell your friends, let everybody know the truth, and work together to stop the persecution.” The young man agreed and said, “I'll definitely tell my friends, and I believe that every person with a sense of justice will support Falun Gong practitioners' efforts against the persecution. I wish you success.” 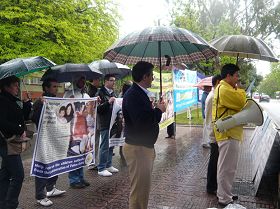 Commemorating the April 25 appeal, practitioners in Spain peacefully protest the persecution in front of the Chinese Embassy 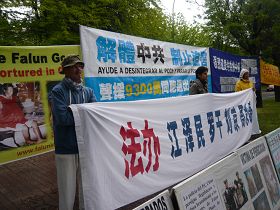 On April 23, practitioners once again gathered in front of the Chinese Embassy despite the rain. They unfurled banners, showed display boards depicting the CCP's atrocities, and handed out flyers to passersby.

The activity took place on the safety island in a major street, so the vehicles on both sides could see the large banners, truth-clarification photos and the peacefully protesting practitioners who stood quietly and determinedly despite the heavy rain. People passing by were impressed and stopped to watch. Vehicles slowed down and people inside wound down the car windows in order to clearly see the banners and photos. From time to time, motorists honked their horns in order to show their support for Falun Gong. Some drivers greeted practitioners.

Two Chinese men passed by across the road and saw words on the banners. They smiled and waved to greet the practitioners, as the practitioners smiled back. More and more people are becoming aware of the truth. 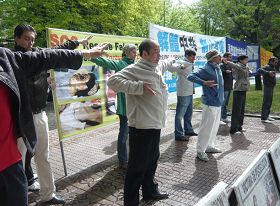 Practitioners demonstrate the graceful Falun Gong exercises after the rain