(Clearwisdom.net) A multi-cultural activity was held on April 7, 2011, in Selangor, Malaysia. Different community groups performed and children presented beautiful dancing and chorus singing performance, attracting many Malaysian people who were immersed in the joyous atmosphere. They also received a special gift from the Divine Land Marching Band. 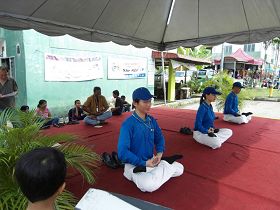 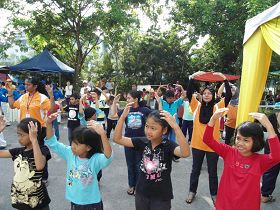 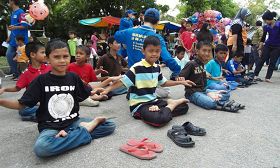 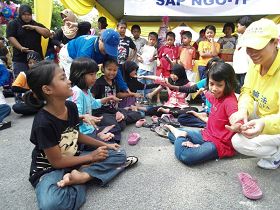 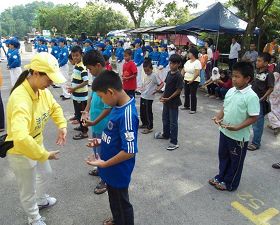 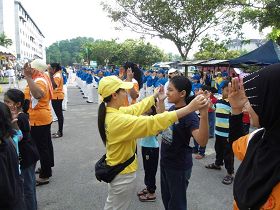 Adults and children learn to practice the Falun Gong exercises

Divine Land Marching Band, composed entirely of Falun Dafa practitioners, started playing music at 8:30 a.m. As an opening prelude to the event. They marched in high spirits into the venue and performed “Falun Dafa is Good,” “Fa Drums and Trumpets Shaken the World in Ten Directions,” “Ode to Joy” and other pieces. They hoped to bring the wonderfulness of Falun Dafa to everyone.

The band's performance was very impressive to the audience. They walked closer to watch: some people enjoyed the performance happily; some people took pictures with their cell phones or cameras, and many children followed the band joyfully, clapping their hands while running around. Some people asked for informational materials about Falun Gong.

The band's members also demonstrated the Falun Gong exercises at 9:30 a.m.. Peaceful music, graceful and gentle movements, and practitioners' calmness, made the entire atmosphere harmonious. Many audience members imitated the movements, and many children sat on the ground, crossing their legs under the practitioners' guidance, and earnestly learned how to meditate.