(Clearwisdom.net) From February 11 to 13, 2011, Phoenix Chinese Week was held on the Square of Chinese Cultural Center in Phoenix, Arizona. It is an annual grand celebration of Chinese New Year. Falun Gong practitioners participated in this event by having a booth.

On Friday, February 11, practitioners’ booth attracted many groups of primary school students and teachers. The practitioners taught the students to say “Falun Dafa is good” in Chinese. The students were happy. Each student got a small bookmark or paper lotus flower with the words “Falun Dafa is good”. Some teachers took a few more bookmarks and flyers and said they would take them back to school to introduce Falun Gong to others. Several hundred students visited the booth in the morning.

On Saturday and Sunday, many people, both Chinese and Western, attended the event. Many visitors expressed interest in Falun Gong. A Chinese descendant from Southeast Asia visited the Falun Gong booth three days in a row and finally left with a copy of the book Zhuan Falun and a DVD of the exercise instructions. She took one copy of each of the informational materials available. She appeared delighted.

Mr. Wang, a Chinese, said he wanted to learn Falun Gong earlier and planned to teach others after he learned it. A Western young man Kirin said he learned Falun Gong from internet and was happy to meet Falun Gong practitioners. He said he would go to group practice in the weekend. Some Chinese people appeared restrained when passing by the Falun Gong booth. The practitioners greeted them warmly and presented bookmarks or paper lotus flowers to passing children. Many of them smiled.

Many Westerners who came said that they had heard of Falun Gong but did not know much about the persecution in China. In front of the booth, many would ask, “Why?” The practitioners would briefly introduce that the reason of the persecution was due to CCP’s evil nature and present them with a copy of the Nine Commentaries on the Communist Party to help them understand better. After listening to the introduction, one man was still curious why CCP wants to persecute Falun Gong. One practitioner answered him, “Because the number of Falun Gong practitioners was huge.” The man smiled and said, “The number of practitioners was huge. That is the answer I want!” He left with the Nine Commentaries on the Communist Party. 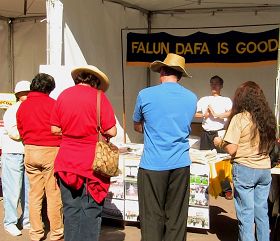