March 30, 2011 |   By a Clearwisdom correspondent in Heilongjiang Province, China

1. Tortured after Appealing for the Right to Practice Falun Dafa in Beijing

In July 1999, former Chinese leader Jiang Zemin started the illegal persecution of Falun Gong. Mr. Chen went to Beijing on July 23 to appeal for the right to practice. Police from the Tahe Public Security Bureau and Ta'nan Police Station arrested Mr. Chen in August, and held him in the Tahe County Detention Center.

In the detention center, the administrators instigated prisoners and guards to beat him, force him to sit on cold ground during winter months without sufficient clothing, and force-feed him. They tortured Mr. Chen, attempting to make him give up his belief, and forced him to write guarantee statements which slandered Falun Dafa. 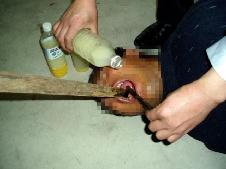 Mr. Chen was imprisoned in the Tahe County Detention Center for four months. He was released after he went on a hunger strike for nine days. Seven days later, he was arrested and taken to the detention center again. Detention center officials extorted $300 USD from Mr. Chen's parents before releasing him.

Police from Tahe County Public Security Bureau secretly recorded Falun Gong practitioners' activities in the Tahe Detention Center, including those of Mr. Chen Tianjie, Ms. Yang Zongying, Mr. Bu Fanwei, Mr. Sha Zhaojin and Ms. Gao Shuying. The officials edited the video and inserted footage that slandered Falun Gong and its founder. The falsified video was broadcast repeatedly in the Tahe News during prime time hours for over a month. The video is played annually during sensitive dates.

In April 2000, the Tahe Public Security Bureau sentenced Mr. Chen to a year in prison and detained him in the Huayuan Forced Labor Camp in Wudalianchi, Heilongjiang. Mr. Chen was ordered to memorize dozens of rules in the camp in a very short time, report to the authorities before he could relieve himself, and perform intensive exercises.

Mr. Chen was awakened at five in the morning, then did heavy labor-intensive work during the day without adequate food. He was placed together with all the other practitioners at night, and forced to sing CCP songs and memorize the labor camp rules. The practitioners were not allowed to talk with each other or other prisoners.

The prison guards used collaborators and criminal offenders to continually monitor practitioners. The collaborators tortured the practitioners in order to force them to give up practicing Falun Gong. They didn't allow practitioners to sleep or rest, and often verbally abused and insulted practitioners, forcing them to sit on stools for prolonged periods. Mr. Chen was not released after he had served his full sentence.

Mr. Chen was transferred to the Suihua Forced Labor Camp in Heilongjiang, where he continued to undergo torture. Guards forced him to read books edited by CCP officials, which slandered Falun Gong and its founder. They constantly tried to brainwash him, and forced him to write statements which renounced Falun Gong. Mr. Chen was not released until the end of 2000, long after he'd served his sentence.

In March 2001, Jin Long and other officers from Tahe Public Security Bureau arrested Mr. Chen without any evidence, and held him in the Tahe Detention Center for several months. Mr. Chen went on a hunger strike to protest the illegal arrest and imprisonment. Later, Mr. Chen's parents took him and his family to Taizhou in Zhejiang province.

On July 28, 2002, Mr. Chen was followed and arrested while he was clarifying the facts about the persecution of Falun Gong. That day, authorities and police officers in Luqiao District, Taizhou searched Mr. Chen's house for hours and confiscated his Falun Dafa books and materials, and fax machine.

While Mr. Chen was being held in the Luqiao District Detention Center, the court gave him an eleven-year sentence based on the number of Falun Dafa fliers taken from his home. His parents and wife received a copy of the sentencing letter. In November, Mr. Chen was taken to the Fifth Prison in Jinhua, Zhejinag. On January 6, 2003, he was transferred to the Strict Management Team of the Fourth Prison in Linping Town, Yuhang District, Hanzhou, where he remains imprisoned.

People who participated in Mr. Chen's persecution and their phone numbers: