(Clearwisdom.net) My name is Li Fayun and my wife's name is Zhao Fengmin. We have been practicing Falun Gong for 14 years. We have suffered cruel torture since July 20, 1999, when the Chinese Communist Party (CCP) started persecuting Falun Gong. Without compassionate Teacher's protection, we couldn't have made it through all these years. 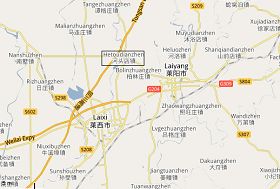 Experiencing the Wonder of Falun Gong

Before I started practicing Falun Gong, I tried to be a good person and follow my conscience. I took fame and personal gain lightly, and made a living just by using my own ability. I felt that I should follow the natural way without any pursuit. I believed that the most significant and happiest thing for a person was to make several close friends in life. I also treated my own life lightly and felt that it wouldn't matter if I lived 10 years more or less. After I started practicing Falun Gong, I realized how precious a human body is. I also understood that my previous standard for being a good person had actually been far away from the principles of Truthfulness, Compassion and Forbearance.

At the end of 1996, my wife heard that Falun Gong teaches people how to become good. She watched the videos of the Jinan City lecture series by Falun Gong's Teacher, Mr. Li Hongzhi, and then became a practitioner. Since then she has been on the path of cultivation and improving herself.

I started practicing Falun Gong at the beginning of 1997. At that time I was quite interested in qigong and traditional Chinese medicine. The principles of Falun Gong—Truthfulness, Compassion, Forbearance—were consistent with my wish to be a good person.

Before I started practicing Falun Dafa, I had many ailments, including back and leg pain and stiffness. Whenever my symptoms became worse, I couldn't work for more than half a year, couldn't squat or sit down, and had to stand or lie down while eating. Since childhood, I also often had a headache and felt drowsy and muddleheaded. I had suffered a lot of pain during my school years and had to drop out of school because of that illness. I couldn't even read books due to the serious headaches.

After I studied Zhuan Falun, my illnesses disappeared without me even noticing it. My head stopped aching before I even finished reading this book for the first time. I had a headache once a month later, but since then, I've never had a headache again. I've witnessed the wonder of Falun Gong and thus greatly solidified my belief.

At 8 a.m. on July 1, 2002, three people who claimed to be officers from the town police station ransacked my home. I was not at home at that time. They confiscated Teacher's picture, audio tapes of Falun Gong lectures and exercises, Zhuan Falun and other books. They left me a message, asking me to come to the police station and verify that these items were mine. They said that I could take my personal property back after verifying it.

That day I went out of the village to get some truth-clarification materials. On my way back home, the materials kept falling out of the box. I had to repack them several times, so I was delayed for a while. The police had just left before I arrived at home. Then I went out and transferred the materials to another place. The police came to my home again while I was out, and at noon time, they showed up again and stayed at my home for a while.

In order to avoid being illegally arrested, I was forced to escape from my own home and become homeless. During that period, I had a difficult time, and the police frequently went to my home and harassed my family. My wife had to take care of a 5-year-old granddaughter, cut the grass, feed the ox and harvest the crops on her own. Due to the persecution, we missed the time for planting adequate wheat—but we still had to submit the crops to the government. We harvested 450 kg of wheat out of 2 mu (a traditional unit of area (1 mu = 0.0667 hectares)). After we submitted 300 kg of wheat to the authorities, we only had 150 kg left for a family of six. The CCP interfered and persecuted us in this manner, preventing us from working and laboring normally, and causing us much financial difficulty.

One day in March 2003, I went to bed early after working hard for a whole day. Chu Yuqian, the team secretary of the CCP Committee, came to my home. I opened the door and saw about eight other people with him, including several policemen, government officials and my son. (They had knocked on my door earlier, but nobody answered, so they brought my son.) They said, “Go to the government office to fill out a form, then you may come back home.” I was determined not to go there, knowing that it was a trap that would lead to unlawful detention. Under Teacher's protection, I escaped from home. Later I spent several months as a homeless person in the countryside.

At approximately 10 p.m. on October 7, 2005, about six to eight officials, including head of the local 610 Office Shen Tao, Sun Guobo, Guo Xian and several others broke into my home. They confiscated my Falun Gong books, truth-clarification materials, cash, a motorcycle and a pair of big scissors for making clothes. They also took Teacher's picture and tore it up on the street.

They beat up my daughter and a nephew, who was only several months old. My daughter was beaten black and blue all over, and they used a flashlight to hit my nephew. They arrested me before beating my daughter. I was detained in the town police station overnight. On the following day, I was taken to the Laixi Police Station and then sent to a detention center.

I was often hungry in the detention center, but was still forced to do the manual labor and make small handcrafts. As soon as I was taken to the detention center, the criminal inmates told me that I had to report by saying “criminal in” or “criminal out” whenever I stepped in or out of the cell. Since I hadn't committed any crime, I refused to do so. Policemen interrogated me and asked me what is the standard for being a good person. They told me to give them the answer when they interrogated me next time. I told them, “Zhen-Shan-Ren is the sole criterion to discern good and bad people” (from Zhuan Falun). They said nothing and left.

At another time, they asked me where I got the truth-clarification materials. I said, “I will not tell you. If I do so, you will persecute him, and it would not be good for you.” After being detained for five months, I was sentenced to seven years in prison. On April 20, 2006, I was taken to the Jinan No. 1 Prison.

In prison, the jail guards instigated the inmates to force me to sit on a small stool and read the books that defamed Falun Gong. After 9 p.m., I was taken to a room called “Jail Guards Office,” where I was ordered to squat and put my hands on my knees. There was a bed covered with a piece of cloth and connected to electricity, which seemed to be used for interfering with people's thoughts or nerves. Whenever I was there, I felt my body leaning backward. I was not allowed to sleep until 2 a.m. and was forced to get up at 5 a.m., at which time another cycle of the persecution began. I was forced to say bad words about Falun Gong to be allowed to use the restroom; otherwise, I was not allowed to use the restroom. Later, I lost my memory. I felt that my mind was empty and heavy. I had trouble breathing. During the imprisonment, the jail guards instigated an inmate named Jiang Xuedong to feed me a cup of water containing some unknown medicine. They tortured me physically, spiritually and mentally by all possible means in order to achieve their goals and get what they wanted from me, the so-called “three statements” to renounce my belief.

I hereby make a solemn declaration that all that I said and wrote under the pressure of the persecution that is not consistent with Falun Gong is void. I will make great efforts to compensate for this loss and walk on the path of righteous cultivation.

During the latter period of imprisonment, I felt seriously harmed, with backaches and leg aches. I couldn't stand up straight while standing. I also had high blood pressure and suffered a hernia.

Why could the police instigate the inmates to persecute us so seriously? Because any inmate who managed to get the “three statements” from us would get 40 points added to his record, which translated to a six-month reduction of the prison term. That's why some inmates persecuted us seriously with all kinds of means.

The above is the persecution experience of a Falun Gong practitioner who believes in Truthfulness, Compassion and Forbearance. What I have described is only part of the unspeakable brutality being suffered by practitioners all over China.