Shen Yun Opens in Philadelphia to Praise from VIPs

(Clearwisdom.net) The country’s oldest grand opera house, the Academy of Music, was host to the most spectacular of performances on Tuesday night, Shen Yun Performing Arts. The New York-based Shen Yun is the world’s premier Chinese classical dance and music company. Its opening performance in Philadelphia drew repeated applause for its beautiful staging, choreography, and dance techniques. 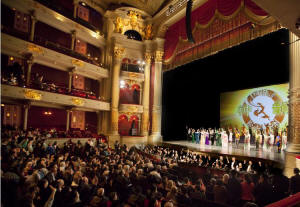 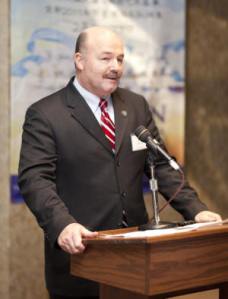 At a VIP reception after the performance, master of ceremonies Kelly Wen said, “Our show features 5,000 years of Chinese culture; it is a show that is considered to be divinely inspired.”

“Tonight's performance was really second to none. The costumes were exquisite, the message was profoundly delivered, transcending many cultural lines. I believe that the singing was the best that it could be, and the dancing was literally outstanding,” said Mr. Madden.

Mr. Madden had planned to attend the performance with his wife, but at the last minute, his wife’s father had to go into the emergency room. Mr. Madden went to Shen Yun anyway to tell the organizers and Shen Yun performers, “Know this: that there are Americans that understand the challenges that face the people in China, and it is a problem, it is a problem that this country needs to stand up against—a lot of the injustices that are being done,” Mr. Madden said.

"It was fabulous"- Bill George, President and CEO of Health Partners

Bill George, President and CEO of the non-profit organization Health Partners, and a Gold sponsor of Shen Yun, said, “Tonight was an absolutely magnificent event.”

Health Partners works to provide medical assistance and insurance coverage to 10 percent of the city’s youth through the children’s health insurance program.

“It was my first time seeing classical Chinese dance, and it was fabulous. I regret that there are only two nights of this performance, and I hope that you come back next year and you are here for four and much larger venues so that more Philadelphians can see how truly magical and wonderful this performance is,” added Mr. George. 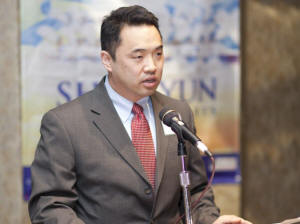 “I thought the show was wonderful. It was such a great mix of musical performance and dance, and the dance was so graceful and full of athleticism. I was really amazed by the performance,” said Mr. Ronald Kim, VP of Information Technology for Exelon.

Exelon is the largest electric utility in the country. Ranked 134th in Fortune 500, it boasts $52.2 billion in assets. Mr. Kim is responsible for all I.T. at PECO in Philadelphia, a subsidiary of Exelon, serving 1.5 million customers.

“I was just really, really impressed,” he said of Shen Yun.

“I think it is a winning formula of very top notch artistic performance, but interwoven with the culture aspect as well.”

Mr. Kim said that he didn’t know much about Chinese classical dance and was impressed by how much he learned.

“For anybody who enjoys the arts I think it’s a wonderful show to come to. I wish I'd brought my kids. I didn't get a chance to, but for children, people of all ages, I think they would enjoy it,” said Mr. Kim.

“It’s a wonderful show and I look forward to seeing it again in the future."

Two middle-aged women from China accepted an interview. One of them, Ms. Li, is a well-educated lady. She said, “The show is fabulous. As a Chinese person, I fell both happy and sorrowful after watching the show. I am happy and proud because the caliber of the show is so high and the audience gave warm applause in this first class theater. I feel sorrow in my heart, on the other hand, seeing what is occurring in China right now.”

Ms. Li continued, “As a Chinese, I feel sorry seeing fellow citizens being persecuted in our own country. I know the facts and feel sorrow in my heart seeing this depicted on stage.”

She said one of her best friends recommended she watch the show, so she bought the best seat. She said, “Chinese people should come to see the show.”

Susanna Squellerio saw the advertisements for Shen Yun Performing Arts and thought it was something that she wanted to see. She then brought her husband and another couple, all doctors, with her to the Academy of Arts in Philadelphia on Wednesday night, Feb. 23.

“The message is very deep and very strong. And also the athletic part, putting it into dance, it’s perfection. Everything is perfect, it’s like in harmony, altogether,” said Mrs. Squellerio.

In many of the dances, you could feel what they were trying to tell you, said Mr. Lavagnini.

Classical Chinese dance is one of the most expressive art forms in the world and Shen Yun presents a wide variety of styles, including ethnic and story-based dances.

Mrs. Shramila Chandran, who attended the performance with her husband, Moses Chandran, said, “I thought this was awesome. It was beautiful to see the artists performing and showing their culture.” 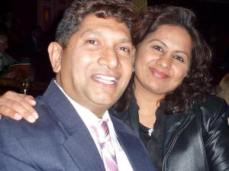 “They’re definitely being very graceful. They’ve shown that they are very graceful, and they’ve also shown some compassion in their actions there. I think that’s really what they’re trying to portray as part of their culture. We were able to get that and able to grasp that. It was a beautiful expression of their culture,” she added.

Mr. Chandran said Shen Yun was very educational. “It’s like a very strong cultural legacy that they’ve written down ... They brought out their whole culture, transforming past and future, and presenting it right now.”

“That was a meaningful thing. We don’t get to see that day-to-day, and you get to see what it was like before. That’s really inspirational,” he added.

Mr. Lavagnini said: “Perhaps you feel a little bit of what [the Chinese people] are missing, or what they left behind, for whatever reasons they left it. They’re bringing it, like the scene with the students and the teacher, and the cultural revolution when they come and kill the teacher.”

Shen Yun, a non-profit organization founded in 2006, takes as its mission the restoration of China’s lost cultural heritage. The dance Mr. Lavagnini is referring to is Our Story, which is inspired by a true account from today of a beloved teacher who is persecuted for writing the principles of the spiritual discipline of Falun Dafa: Truthfulness, Compassion and Forbearance, on the blackboard.

Mr. Lavagnini reflected that one of the strongest aspects of America is the large number of emigres, many of them Chinese. He remarked how they remain attached to their roots, and said the power of the Chinese people’s race and culture could be felt through Shen Yun. 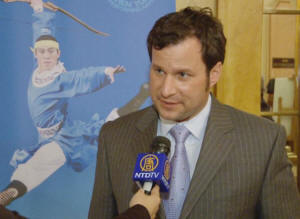 Attorney Daniel Glennon, the principal in his law firm

Attorney Daniel Glennon, the principal in his law firm, came back a second time on Feb. 23 to watch Shen Yun at Philadelphia’s Academy of Music.

“I was here last night with my wife and tonight I am here with my son,” he said.

Why did he want to bring his son and see it again himself?

“I found it very inspirational. I certainly wanted to expose my son to this culture and to these remarkable performers,” he said.

Mr. Glennon said he was stirred by the messages that he perceived and the artistic presentation of ideas.

“It approaches very current issues in a very artistic and meaningful way, and it transmits a message beyond time. And it brings forward a culture that’s older than any other culture on this earth. And yet the relevance of those ancient ideas is upon us today."

Some scenes in the show depict contemporary China under repressive rule. A beloved and loving teacher is arrested for teaching traditional values, for example. That dance was based on a true story, according to the Masters of Ceremonies who give context for each dance. Mr. Glennon said the performance made him to want to speak up and rouse others to do the same.

He spoke slowly and with deliberation: “The inspiration that I gather from this, and I hope that anyone else who sees this, is not only to tell other people about this but also to voice their opinion. And to learn about what's going on in China right now, and to do what they can. Whether doing what they can means writing about this or speaking out about this.”
Category: Shen Yun Performing Arts