(Clearwisdom.net) From January 28 to 30, 2011, a Chinese New Year celebration was held on Hisaya Hiroba Square near Sakae, the busiest area in Nagoya, Japan. Many people joined the event. Falun Gong practitioners introduced the practice and exposed the Chinese Communist Party's (CCP’s) persecution of Falun Gong during the event. They also advised Chinese people to quit the CCP and its affiliated organizations. Approximately 150 people renounced the CCP on site. 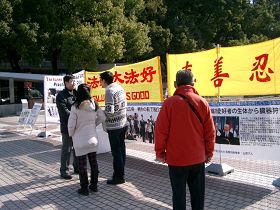 In the three-day event, practitioners held banners worded “Falun Dafa is Great” and “Truth-Compassion-Forbearance” in both Chinese and English. They also displayed photos showing the wide spread of Falun Gong around the world and exposing the CCP’s torture methods in its persecution of practitioners. Many passersby, including Chinese, paused to look or learn the facts.

A Chinese student in his 20s listened to the words of a practitioner and then said, “Thank you. Please help me quit the CCP.”

Another Chinese student in her 20s came across a practitioner distributing Falun Gong flyers and saw the banners. She was very excited, “I've finally find you.” She called her mother in China right away. She said her mother practiced Falun Gong in China and asked her to look for practitioners in Japan.

She talked with a practitioner for two hours. She said, “In my family, only my mom practices Falun Gong. I don’t object to her practicing it, but others in my family worry about her safety and object. My mom is under a lot of pressure. She told me Falun Gong is good, but others told me not to listen to my mom. I was confused and did not know why. I knew practitioners in China continued practicing Falun Gong after being released from prisons.”