(Clearwisdom.net) Ms. Yang is a singer from Beijing. She attended the Shen Yun Performing Arts show in Nashville, Tennessee on February 19, 2011. After the show she said with excitement, “Excellent! I am so touched! I trully did not expect that it would be so wonderful, of such international quality. I have not had enough; I really want to watch it a few more times!” 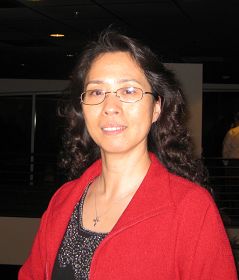 Ms. Yang's mother is an oil painter and her father is a writer. She graduated from the Chinese People's Liberation Army Art School and used to be a mezzo-soprano singer in the Air Force Song and Dance Ensemble. She eventually got tired of the environment and complex interpersonal relationships in the performance business and later became a music publisher.

According to Yang, a friend of hers gave her a ticket to the Shen Yun show as a birthday present. When she heard that it was a performance of Chinese culture, she initially refused to go. “I swore that I would never want to see Chinese singing and dancing again,” said Ms. Yang. Her friend persuaded her, “You must go. I know you still have dreams about art.”

Ms. Yang was thrilled after the show and spoke with tears in her eyes, “I am so glad I came! I can't help but crying after seeing the show because I saw the spirit of artists pursuing art with their lives and it has awakened my dream again. After I came to the U.S., to make a living, I had to switch careers. I was overwhelmed being able to see a grand arts group performing such beautiful, superb, pure Chinese culture! I have not had dinner tonight but I am not hungry at all. I am so excited to know that there are still artists like me who are deeply inspired by art.”

Yang was able to name almost all the titles of the individual dances on the program. She said, “I remembered many of the titles because the dances were so impressive and so beautiful. They were full of the traditional charm. Every dance grasps the essence and character of every dynasty or ethnicity. The moves, costumes, the overall performance were exceptional!”

Ms. Yang felts that the ethnic dances were absolutely charming. “Every ethnic group has its unique style, very elegant and refreshing. The expressions were full of emotions and vitality, with special essence and deeper meanings, very different from the dances one sees in China [today]. The ethnic dances in China today are uncouth but Shen Yun's dances are elegant. For example, the dancing in 'Harvest Joy' expresses festivity, simplicity, enthusiasm and happiness. It was so much fun.”

Th music also impressed Yang. She said, “The music is outstanding and the orchestra's performance was perfect. The music and the dances blend together flawlessly. It is hard to come by when all the music is original. Amazing. The pianist did a wonderful job, which is very important in a show.”