(Clearwisdom.net) On November 22, 2011, Mr. David Matas, a well-known Canadian human rights lawyer who was nominated for the 2010 Nobel Peace Prize, visited Western Australia. He gave a talk in St John of God Hospital, Subiaco about the investigation of the CCP’s live organ harvesting from Falun Gong practitioners in China, which was conducted by himself and David Kilgour. He also held a press conference on their book Bloody Harvest. Near one hundred doctors and others listened to the seminar. 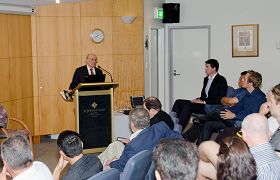 The seminar was hosted by Dr. Rosanna Capolingua, former federal president of Australian Medical Association (AMA) and Dr. Geoffrey Dobb, Chairman of ANZICS (The Australian and New Zealand Intensive Care Society) Committee on Organ and Tissue Donation. Before the seminar, Mr. Matas was interviewed by radio stations 6PR, RTR FM and Australia Broadcasting Station. The 6PR radio station broadcasted a ten-minute interview at 11 am and a half-hour interview at 4 pm.

In the radio programs, he told listeners that the CCP’s live organ harvesting happened and is still going on. Mr. Matas and Kilgour are not Falun Gong practitioners. Since 2006, they have conducted investigations on allegations of live organ harvesting from Falun Gong practitioners in China. The investigation is ongoing and new evidence is still being uncovered.

Two Falun Gong practitioners, Mr. Lin and Mr. Zhao, narrated their experience in the China’s labor camps. They were tortured by various means. Some people that were listening on site wept during the presentation.

Ms. Brendon is a nurse. It was her first time to hear about live organ harvesting, and she was shocked by it. She posted the seminar notice in her hospital. Her husband is a doctor and came to attend the seminar. After listening to Mr. Matas’s talk, he bought the book Bloody Harvest and said he would let more people know this issue.