(Clearwisdom.net) The Korean Divine Land Marching Band and Waist Drum Troupe, composed entirely of Falun Gong practitioners, participated in the Pyeongtaek Port International Marathon on October 2, 2011. Their wonderful performance was warmly received by city officials, local residents and marathon contestants, and became focus of attention for the local media. It was the second time that the Divine Land March Band had participated in an international event in Korea.

Pyeongtaek Port is a central port for Northeast Asia and a critical navy base. The navy band has participated in the Marathon activities for years and had applied to perform for the 2011 Marathon as well. This year, however, the organizers of the event chose the Divine Land Marching Band to provide the music for the event. 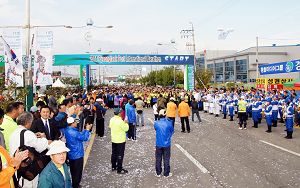 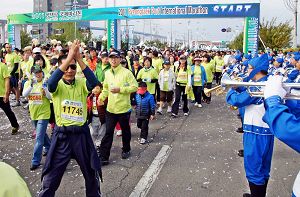 Contestants show their appreciation to the Divine Land Marching Band

The Pyeongtaek Marathon has a ten-year history and became an international competition for the first time this year. More than twenty thousand contestants from twenty cities in four countries participated in the Marathon. The Mayor of Pyeongtaek and city councilmen attended the event and got an opportunity to learn about Falun Gong. Marathon contestants also received Falun Gong introductory materials with great interest.

City Councilman Mr. Choi said, “I have heard about Falun Gong before, but I didn't know it was so great! It is so wonderful!” Several councilmen said that they gained a deeper understanding of Falun Gong through this activity.

The Divine Land Marching Band, which was arranged to perform at the starting line beginning at 9 a.m., played beautiful, refreshing and powerful music at the beginning of the 5 km and 10 km races, the ½ Marathon and Marathon. Some contestants stopped, cheered and clapped to the beautiful music. 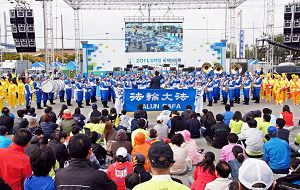 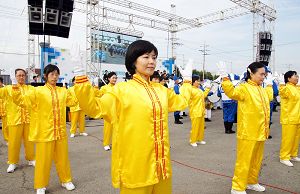 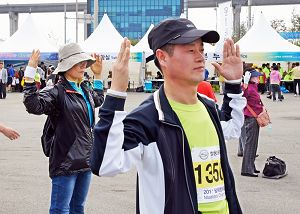 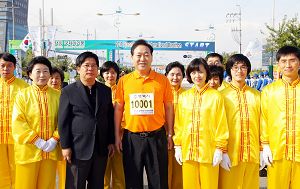 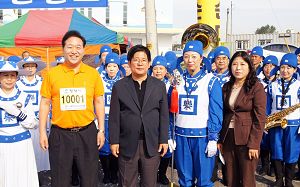 After the contestants left the starting line, Mayor of Pyeongtaek Mr. Kim Sun Gi visited the marching band and thanked the band members for their great contribution. Several practitioners told Mr. Kim about the benefits of Falun Gong and thanked the Mayor and City Council for this great opportunity.

Kyeongin Ilbo, one of the sponsors of the Marathon, reported on the Divine Land Marching Band with the following write-up: “The Divine Land Marching Band, composed of practitioners of Falun Gong, a traditional Chinese cultivation practice, played powerful and beautiful music at the Marathon. Starting from 9 a.m., the band continued to play music for an hour and a half around the field. Their neat alignment and resonant music became the focus of attention.” Many local citizens also introduced Falun Gong on their blogs.