(Clearwisdom.net) Practitioners in Finland set up a truth clarification table at the Helsinki Central Railway Station on October 1, 2011 to introduce Falun Gong and raise people's awareness about the 12-year brutal persecution of Falun Gong practitioners by the Chinese Communist Party (CCP). People who learned the facts expressed their righteous support. 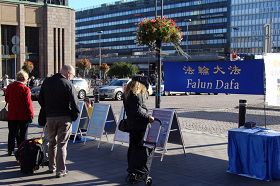 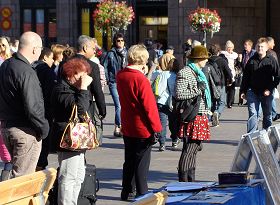 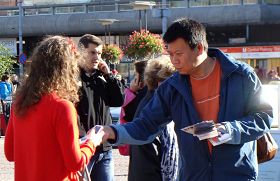 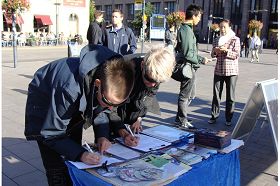 People sign the petition to support practitioners to end the persecution

Many passersby were drawn to the display boards exposing the brutal persecution, and stopped to view them. Some people read information about Falun Gong and signed the petition to support practitioners' efforts to call for an end to the persecution. Some praised the practitioners for their efforts.

One lady walked up to a practitioner who was distributing information about Falun Gong to passersby and said, “I remember you. I took your informational materials six months ago. And a paper lotus flower. The flower is on a table in my home. You have done quite right.”

A middle-aged woman stood for a long time watching practitioners demonstrate the Falun Gong exercises. A practitioner walked up to her, introduced her to the five exercises, and told her that Falun Gong is beneficial to people both physically and mentally, suitable for people of all ages, and that the practitioners offer free exercise instruction every Wednesday. The woman said she wanted to come to learn.

Two foreign tourists took flyers and inquired why the Chinese Communist regime persecutes Falun Gong. A practitioner explained to them and the two ladies nodded their heads and said that they have learned about the Communist Party's evil nature. They also said that when they stayed in Greece, they had heard that Falun Gong emphasizes the principles of Truthfulness-Compassion-Forbearance, and it requires practitioners to cultivate their minds and become better people. They knew that Falun Gong is a peaceful and nonpolitical group. Before leaving they said that they would browse the Falun Gong website to learn more about it.