(Clearwisdom.net) The Malaysia Falun Dafa Cultivation Experience Sharing Conference was held on October 23, 2011, at the Crystal Crown Hotel in Klang, Selangor, Malaysia. Attending the conference were local practitioners and practitioners from Singapore, Vietnam, Hong Kong, and Taiwan. Practitioners got together to share cultivation experiences and exchange understandings and insights to strive forward diligently together. 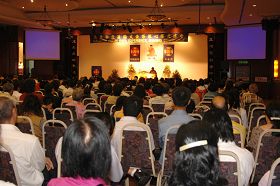 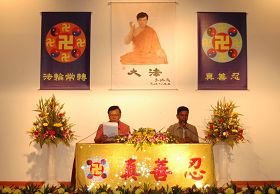 Twenty-four practitioners shared their cultivation experiences and understandings. A new practitioner told how he benefitted physically and mentally from practicing Falun Gong. Several practitioners shared how they overcome difficulties, let go of the attachment to comfort, keep clarifying the facts about Falun Gong, and do well the three things in their respective situations and Fa validation projects. Practitioners who used to lag behind shared how they overcame adversities and returned to Dafa cultivation. They were deeply aware that they should cherish Dafa and this rare opportunity millions of years in the making.

A New Practitioner: The Most Precious Gift

Pathemanathan of Indian descent is a new practitioner who began practicing Falun Gong a little over two months ago. He said it was the most precious gift for his body, mind, and spirit. He sincerely expressed his gratitude to Master Li for having given him an opportunity to cultivate in Dafa. He said that he is becoming healthier and also improving his xinxing.

Mr. Zhang from Hanoi, Vietnam, works in Malaysia. He began practicing Falun Gong in late 2010. He happened to learn about Falun Gong and the Chinese Communist Party persecution of the practice when he was browsing websites. He was initially upset at not being able to share with practitioners due to the language barrier, but later he got met other practitioners in Vietnam via the Internet and took part in group Fa-study and shared cultivation experiences. He was excited and made up his mind to be diligent in cultivation. He said the book Zhuan Falun made him change for the better and opened up a new world for him. He started introducing other Vietnamese to Falun Gong and brought them the goodness of Dafa. They were pleased and grateful to him after getting informational materials. One of his colleagues wants to join him in practicing Falun Gong.

Continuing to Clarify the Truth after Moving Overseas

Ms. Chen came to Malaysia from China. In this relatively relaxed cultivation environment, she warns herself not to slack off, that she should continue making efforts to do well the three things. Three days after she arrived in Malaysia, she brought her child, who was less than five years old, to a tourist site to help the Chinese tourists learn the facts about Falun Gong. She said that after the Chinese tourists became aware of the facts, she felt she had done what she was supposed to do, and all fatigue disappeared. What was left was nothing but the desire to stay steadfast and diligent.

Cherish the Opportunity to Cultivate in Dafa

Young practitioner Mr. Xiao Yan began practicing Falun Gong two years ago. He said that, since it was so easy for him to obtain Dafa, he didn't know he should cherish it and slacked off due to everyday temptations. He didn't study the Fa and do the exercises for a year. Gradually, he came to realize that he was wrong and made up him mind to keep up studying the Fa. He really feels that the Fa is invaluable. He understands that trials and tribulations are tests to see if our minds are steadfast in cultivation. He hopes that practitioners will be diligent together and do better and better.

The Fa conference concluded at 5:00 p.m. The precious sharings and understandings provided an opportunity for fellow practitioners to compare and learn from each other. Everyone benefitted a great deal.