(Clearwisdom.net) On October 15, Falun Gong practitioners in Missouri participated in the Homecoming Parade held on the campus of the University of Missouri-Columbia. The parade, which is the oldest homecoming parade in the country, was celebrating its 100 year anniversary. This year, more than 100 groups took part, as tens of thousand students, faculty members, and parents watched. 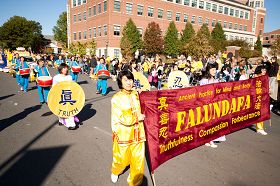 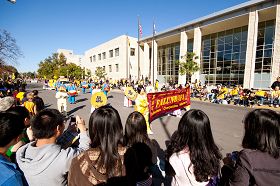 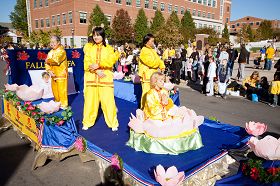 The Falun Gong entry consisted of a celestial maiden dancers, a drum team, and a float on which practitioners demonstrated the exercises. Spectators warmly welcomed the practitioners, and many Chinese students seemed excited to see Falun Gong in the parade. They took photos and waved.

Afterwards, a Chinese practitioner, said, “This is the first time I've come to this parade. I am very happy to be here, bringing the beauty of Falun Gong to the public. I was glad to see that many Chinese students liked our performances. They followed us, taking photos and waving to us. Most of them have never seen Falun Gong in China. They didn't know that people can freely practice Falun Gong in America. Today they saw how peaceful we are and how beautiful Falun Gong is. It is totally the opposite of the Chinese Communist Party lies about Falun Gong.”