(Clearwisdom.net) On December 31, 2010, the Taoyuan County Council unanimously passed a motion “not to invite, welcome, or receive Chinese Communist Party (CCP) officials who are highly suspected of human rights violations.” This is the eleventh county in Taiwan that has passed such a resolution. 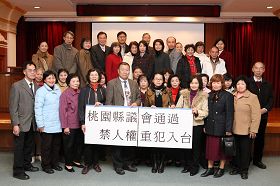 The 17th Taoyuan County Council held a meeting on December 31 and unanimously passed the motion raised by Huang Zhiming and the other 14 councilmen. The motion urged the Mainland Affairs Council and the National Immigration Agency to conduct a detailed investigation into the human rights record of CCP officials who apply to enter Taiwan. If severe violations of human rights are found, these officials should be denied entry. The motion also asked all levels of government and civil organizations in Taoyuan County not to invite, welcome or receive CCP officials who are involved in severe human rights violations.

Councilman Huang Zhiming pointed out that human rights and the legislative system are core values for all human beings and as a public official it was his responsibility to raise the motion. Right now the government is dedicated to economic development in Taiwan, and they are working closely with the CCP, and in doing so they are overlooking human rights violation. Therefore, everyone should safeguard democracy and human rights in Taiwan.

Councilman Xu Qingshun from the Democratic Development Party said that any CCP official who has severely violated human rights should be denied entry to Taiwan. If the government violates the law, then all the organizations should cooperate with each other to defend democracy and freedom in Taiwan.

Attorney Hong Shiyuan said it is a great thing that Taoyuan County became the eleventh county in Taiwan that passed the resolution denying entry to human rights violators. Since Taoyuan County is the gateway for people to enter that country, unanimously passing a such resolution has tremendous significance.

Hong Shiyuan said that after the Legislative Committee passed the resolution denying entry to human rights violators on December 7, the names of CCP officials who apply to come to Taiwan and their tentative schedules should be publicly published. For those officials who have participate in the persecution against Falun Gong practitioners, Chinese democratic groups and Tibetans, the public should be allowed to help collect evidence and monitor the entire process.

Deputy Chairperson of the Committee on Social Welfare from the Chinese Association for Human Rights Li Wenxin said, “Everyone was born with equal human rights. Both people in mainland China and Taiwan should enjoy the same level of respect in society.” She agreed that the Taiwanese government should carry out detailed investigation into the human rights record of those CCP officials who apply to enter Taiwan.