Australia: Sydney Supports 88 Million Chinese People Who Have Quit the CCP and Its Affiliated Organizations (Photo)

January 29, 2011 |   By a Falun Dafa practitioner in Australia
(Clearwisdom.net) The Sydney Quit-the-CCP Service Center held a series of activities on the morning of January 23, 2011 in front of the Golden Water Mouth in Sydney's Chinatown where a stream of people passed by. The activities included supporting 88 million courageous Chinese people who have resigned from the Chinese Communist Party and its affiliated organizations, the Great Wall of Truth, and helping Chinese quit the CCP on site. The event aimed to celebrate Chinese people's spiritual awakening and at the same time encourage more Chinese people to quit the CCP and its affiliated organizations for the sake of their own safety. 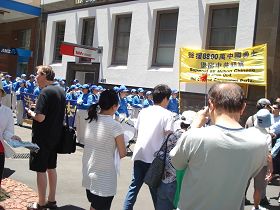 During the event, many passersby stop to learn the facts, and some people take photos to record the historical moment.

Huge banners were displayed on both sides of the road. The banners carried the messages: “Heaven eliminates the CCP, quit the CCP for the sake of your safety,” “Support 88 million courageous people who quit the evil CCP,” and “Only by disintegrating the CCP can the persecution be stopped.” Sydney Divine Land Marching Band performed “Falun Dafa Is Good,” which drew the attention many people who then watched and took photos. Many people from mainland China learned the facts and announced their resignations from the CCP and its affiliated organizations.