(Clearwisdom.net) On September 18 and 19, the Malaysian Divine Land Marching Band was invited to perform in Kedah and Penang as part of local Mid-Autumn Festival celebration programs. 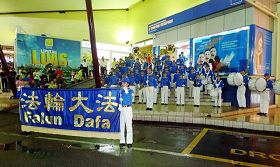 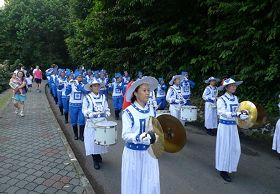 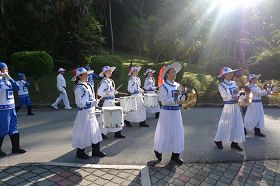 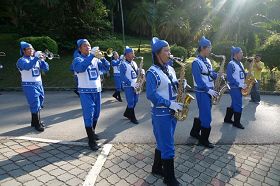 Performing at the Botanical Garden of Penang

On the evening of September 18, the band performed "Falun Dafa is Good," "Song of Joy," and "Delivering Precious Gifts" at the food court of a shopping center in Kedah. Their performance attracted many people. The band then played outdoors on the Central Square. Though it was sprinkling, the performance was very well received by the spectators. Several employees of a popular fast food restaurant were touched by the music and wanted to learn about Falun Dafa. They also allowed practitioners to distribute Falun Dafa fliers inside their restaurant.

In the early morning of September 19, the Divine Land Marching Band went to the famous Penang Botanical Garden. Their performance attracted many people who were out for morning exercises. At noontime, the band went to Buki Jambul Mall to perform as part of the Mall's Mid-Autumn Festival program. With the approval of the mall manager, the practitioners also played Falun Dafa truth-clarifying videos and demonstrated the Falun Gong exercises.