The Buddha Light Shines on Port City of Qinhuangdao (Photos)

September 26, 2010 |   By a Falun Dafa practitioner in Qinhuangdao, Hebei Province

(Clearwisdom.net) Qinhuangdao is a popular port city. In 215 B.C. Qin Shi Huang, the first Emperor of the Qin Dynasty, visited this area and engraved the "brown stone gate poem," on a stone. That is how Qinhuangdao got its name. Its divine culture and having been part of ancient civilization has made Qinhuangdao a place popular to all, especially given its unique history.

In May 1992, when Teacher Li Hongzhi began to teach Falun Dafa and the principle of Truthfulness-Compassion-Forbearance here, people suddenly realized that a cultivation culture that had been weaving through China's several thousand years of civilization was at their fingertips. The practice of Falun Dafa teaches people to return to their origins and benefits countless people. Diverse people, from illiterate farmers to graduate students, doctors, scientists, even four- or five-year-old children, as well as the elderly joined the practice. The citizens of Qinhuangdao welcomed Falun Dafa during a beautiful autumn into their midst. 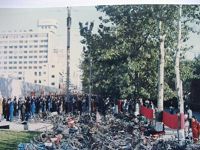 Beginning in October 1994, practitioners who attended Teacher's lectures in Dalian began to practice the exercises in Tanghe Park, Qinhuangdao, which is located at the waterfront. First, there were about ten people doing the exercises either in Tanghe Park or in People's Park. Many practitioners experienced the benefits of becoming healthy and keeping fit. There was no need for advertisements; people learned of the practice by word of mouth, or saw practitioners during their morning practice. People with a predestined relationship came one after another. 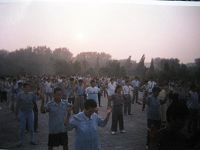 From 1995, practitioners who benefited from the practice went to other areas to do the exercises, so they could introduce Falun Gong to more people. Their wish was that people would attain good health and improve their character.

Practitioners came on bikes, walked to the location, carried books, tape recorders and other items that were used at the practice site. They practiced the exercises together. People with a predestined relationship with Falun Gong saw or heard them. They would come to inquire about it and some learned it on the spot. Everything was tranquil, natural and the environment was filled with harmony. 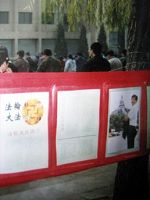 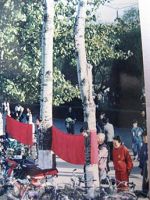 The number of practitioners multiplied in 1996. There were 80 practice sites and at least 20,000 practitioners in the city. This means that there was one Falun Gong practitioner out of every 100 residents in Qinhuangdao City, not including those practicing on their own.

Three to four years prior to July 20, 1999, every morning around 5:30 a.m. in winter and 5 a.m. during all other seasons, when the residents in that city were still asleep, tens of thousands of men and women, old and young came to the many practice sites in the city parks. They either walked or arrived on a bike. It was very harmonious.

Exactly at 5 a.m., between several dozen and a hundred people, without being told, formed row after row to do the exercises. The melodious practice music filled the air. Such scenes could be seen day after day, year after year and became a common scene every morning.

Neither wind nor rain stopped the people from coming. One could meet one's colleagues, schoolmates, customers, boss, and acquaintances at a practice site, and only then realize that they were fellow practitioners. Everyone was happy for each other, as all had attained the great Fa. 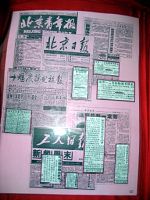 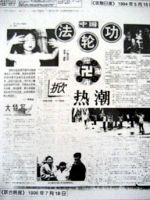 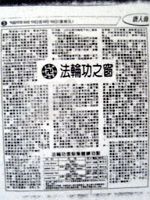 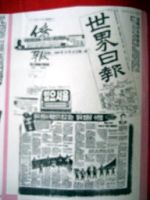 Photocopy of newspaper reports of Falun Gong spreading in and outside of China including a "Falun Dafa Introduction."

Kind smiles, calm voices, and solemn manners greeted everyone, even if one was a newcomer. The purity and compassion that came from the hearts of practitioners welcomed everyone.

People were honest. No practitioner would demand one cent of compensation from anyone, even if hit by a car, and no matter how far the distance, they would return money to a store that overpaid them by 20 cents, and not accept any gifts unless they could pay in full what was owed. A practitioner would not cut in line to be the first on the bus, because one has to be considerate of others in all matters. Selfishness was replaced with selflessness.

The Opposite of Falun Gong

The Chinese Communist Party (CCP) promotes atheism. Marxism is the opposite of Chinese traditional culture. Atheism has turned the Chinese people into a CCP tool, pushing violence and slandering China's true essence - the culture of Confucianism, Buddha and Tao, which advocates benevolence, compassion and truthfulness. As a result, the Chinese have become a rootless people.

Because of the CCP regime, which advocates lies, violence and struggle, kind Chinese people drift with the current. Morality slides down. People have bitter and tired lives and dignity has fallen by the wayside. People dare not to say the truth, even among acquaintances and dare not do good deeds on the street.

The people no longer know how to live like dignified human beings. Shouldn't that be part of all Chinese people? We, as a nation, have to retrieve the Chinese traditional culture that has been destroyed by the CCP, retrieve the correct Fa and Dao that the Chinese people should follow and find the real significance of why we are here in this world.

It has been eleven years since people could hear the gentle melodious music in the morning weaving through the parks of our cities and villages. It has been eleven years without the quiet and peaceful gathering of Falun Gong practitioners. Such scenes originally belonged to the first wisp of sunlight, but now have been masked by the CCP's dark cloud of lies and violence. But how can the dark clouds block the sun?

When our colleagues, schoolmates, relatives and friends all understand that the CCP's propaganda against Falun Gong is all lies in order to suppress Falun Gong, then the sun will shine again. When our neighbors and people we meet all understand that "Falun Dafa is good," that withdrawing from CCP and its affiliated organizations will save one's life, and when my fellow citizens from Qinhuangdao all have the opportunity to hear about Falun Gong and can listen to the facts about Falun Gong, ponder the truth and understand how to distinguish between good and evil, practitioners will have accomplished what they set out to do. People will then see the sunlight and receive blessings.