Mr. Xin Yanjun Dies after Becoming Paralyzed as Result of Torture While Imprisoned

September 25, 2010 |   By a Clearwisdom correspondent from Jilin Province, China

(Clearwisdom.net) Mr. Xin Yanjun was an army lieutenant. He used to have headaches, high blood pressure, and heart disease, but after he began practicing Falun Gong in 1996, he regained good health. He was very helpful to others, positive, and well received by people. 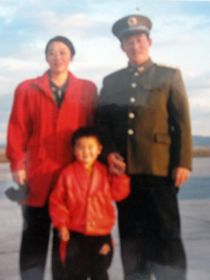 Mr. Xin Yanjun with his wife and son

After the persecution started in July 1999, police illegally arrested Mr. Xin and detained him in the Yanji City Prison for 15 days. He was released after officials extorted money from his family. Then the army dismissed him along with more than 40 other practitioners, and he was assigned a job in the Yanji City Tap Water Company.

Mr. Xin was soon arrested a second time and detained in the Yanji City Prison again. Officials extorted money from his family once again, even though they were very poor.

After getting arrested a third time in the spring of 2002, Mr. Xin managed to escape, and was then forced to leave his home and roam around to avoid being arrested again. When he went back home to get some warm clothes in the fall of 2002, however, he was arrested at the Yanji City Bus Station and taken directly to Jilin City Prison with a seven-year sentence.

Mr. Xin was severely tortured during his three and a half years at the Jilin Prison. The guards attempted to freeze him to death by stripping him, forcing him to stand outside, and pouring cold water on him every time he passed out due to the cold.

Mr. Xin was subjected to the "sitting board" (1) torture for two months because he refused to renounce his belief in Falun Gong. The guards also instigated criminal inmates to beat and abuse him at will.

Additionally, the guards tied up Mr. Xin's arms and legs between two bunk beds and then ordered four strong prisoners to twist his legs with sticks formed in a cross. Then they stomped on his legs, crippling both of his legs. Mr. Xin passed out due to extreme pain and regained consciousness only when he felt cold water being poured on him. This torture was repeated many times.

As a result of the abuse, Mr. Xin lost his ability to walk and take care of himself, and he also suffered incontinence. The left side of his body was severely damaged, his left arm was fractured, and one of his teeth was knocked out.

On several occasions during his imprisonment, officials also extorted money from his family. At one time, they required the family to pay several thousand yuan for a hospital physical exam, which should have been paid for by the prison. At another time, prison officials promised to release Mr. Xin if the family sent money. When the money was sent, Mr. Xin was still not released.

As Mr. Xin's condition continued to worsen, Jilin prison authorities became afraid of having to be responsible for his death, so they transferred him to Tiebei Prison. Once Mr. Xin became unconscious and appeared to be very near death, he was taken to a hospital. Prison authorities then called his family and offered them 20,000 yuan to take Mr. Xin home, so that they could deny any responsibility for his death. The family took Mr. Xin home wrapped in a bed cover and with an oxygen tank.

Mr. Xin subsequently regained consciousness at home. His 80-year-old mother had to take care of him while his wife worked and raised their son. He was paralyzed and suffered from extreme pain and other severe conditions. He also experienced lack of mental clarity and could not recognize people as a result of being injected with nerve-damaging drugs at Jilin Prison.

(1) Sitting Board Torture Method-- Practitioners were forced to put their hands on their laps, sitting on benches for 18 hours per day with their backs straight. This continued for over 50 days. The authorities also limited practitioners' restroom use. Because of the long time spent sitting on hard benches, practitioners developed large, painful sores on their buttocks and could not urinate normally due to the pain.