(Clearwisdom.net) In 2005, Attorney Gao Zhisheng recorded in his well-known open letter, the brutal torture that Falun Gong practitioner Sun Shuxiang from Changchun City suffered. On September 22, 2009, Sun Shuxiang was arrested and was again subjected to brutal torture at the Heizuizi Forced Labor Camp in Changchun City for nine months. Sun Shuxiang was released in June 2010. She was in severe condition and her body was very emaciated when she was released (see the photo below). Below is an account based on Sun Shuxiang's personal description of the persecution she suffered in the forced labor camp. 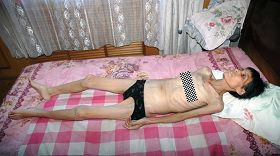 Arrested by Police, Tortured with Back Cuffing

Early on the morning of September 22, 2009, Sun Shuxiang took her grandson to school and then went back home. Immediately after she opened her door, a policeman from the Changchun City National Security Team rushed out and covered her mouth to prevent her from making a sound. Meanwhile, three police officers went into her house and took many of her personal belongings, including three Falun Dafa books, over 20 truth-clarifying DVDs, and 1,800 yuan in paper money that had truth-clarifying words written on it.

In the Changchun City Public Security Bureau, the police imprinted Sun Shuxiang's fingerprints on fabricated documents. A policeman crossed Sun Shuxiang's arm around her shoulder and then brutally dragged the arm down while pulling the other arm up behind her back. Then he tightly cuffed her two arms with handcuffs. (The police call this torture "carrying a sword in the back") This caused extreme pain in Sun Shuxiang's arms, causing her to scream. The police then pulled her fingers open and forcibly imprinted her fingerprint on fabricated documents created by the police. These fabricated materials were used as evidence to further persecute her.

Three days later, Sun Shuxiang was detained at the Third Detention Center in Changchun City. After three days in the detention center, she was sent to the Changchun City Public Security Hospital because the detention center doctor wasn't able to extract blood from her during the physical examination there. In the hospital, she heard Falun Gong practitioners in the next room who were tied up and being injected with drugs. She hit the wall with an empty bottle to protest the persecution. A criminal who was there to monitor Sun Shuxiang stopped her and then attacked her. During Sun Shuxiang's detention in the hospital, she was injected with unknown drugs every day.

Over a month later, Sun Shuxiang was transferred to the First Team at Heizuizi Forced Labor Camp in Changchun City. Yan Lifeng (female, about 40) chief of the First Team, tried to force Ms. Sun to give up her belief in Falun Dafa every day. She also tried to force her to write a letter slandering Dafa and Teacher, but Sun Shuxiang firmly refused. The police then forced Ms. Sun to do intense work and watch TV programs which slandered Dafa. Once, when Sun Shuxiang returned to her prison room after a day of intense forced labor, the guards forced her to stand, and after 20 minutes Sun Shuxiang fainted. The next day, the guards pulled her from bed and forced her to continue doing the forced labor. The guards wanted to destroy her both physically and mentally. They not only forced Sun Shuxiang to watch brainwashing materials during the forced labor in the daytime, but also forced her to watch the materials that slandered Dafa and Teacher at night.

During the 2009 winter, after a heavy snow, chief Yan Lifeng incited police officer Zhou Zhanhong (female, in her thirties) to force Sun Shuxiang to shovel snow in temperatures more than 30 degrees below zero. The second time she was forced to shovel snow, she was extremely weak and could not walk. Police officer Wang Lei (female, about 40 years old) thought she walked too slowly, and dragged her by the arm. Sun Shuxiang immediately felt great pain in her left rib. She could not breathe. She squatted on the ground and coughed fiercely. Another time, police officer Wang Lei sent Ms. Sun and another Falun Gong practitioner to the China and Japan United Hospital for an examination. On the road, Wang Lei intentionally pulled Sun Shuxiang's arm. She felt great pain in her stomach and she couldn't breathe. Since Sun Shuxiang was often brutally tortured, she had to be sent to the Public Security Hospital and the China and Japan United Hospital for examinations and drug injections many times. Once, on the way to the China and Japan United Hospital, a guard from the Security Guard Section hit Sun Shuxiang in the abdomen very hard, with the excuse that he was not happy that she spoke. Sun Shuxiang was then unable to breathe. She subsequently couldn't eat or drink for a long time and she had constant pain in her stomach. The forced labor camp's examination showed that her intestines were blocked and her abdomen was full of gas. When she coughed, the intestines moved up and down against her stomach. She was extremely weak, her heart rate was extremely fast, and she could hardly breathe. It was difficult for her to walk and get to the restroom. She had to rub her stomach frequently to alleviate the pain.

Each time after the police forcibly injected drugs into Sun Shuxiang, they made her do forced labor, regardless of her physical condition. Sun Shuxiang was also subjected to mental torture every day since she refused to give up her belief in Falun Dafa. She was almost too weak to stand. The police then forced her to sit and read books which slandered Falun Dafa and Teacher. Every day she was forced to sit until 11:00 p.m. or midnight. Zhou Zhanhong once dragged Sun Shuxiang to the detention room to force her to write a repentance statement, but she refused. Zhou Zhanhong then used an electric baton to beat her left arm black and blue, and forced a pen into her hand, grabbed her hand and wrote two repentance statements.

Due to the constant physical and mental torture, Sun Shuxiang's body was very thin and extremely weak. Nonetheless, guards Yang Lifeng and Zhou Zhanhong still incited criminal Fu Qiaoyun (female, in her fifties) to force Sun Shuxiang to work faster and give her a hard time. In the end, Ms. Sun could not even hold a pair of scissors due to the mistreatment. Yang Lifeng had to ask her family members to sign the release papers and take her home. But Sun Shuxiang didn't agree to let her family sign. Yan Lifeng said, "If you don't let your family sign, you have to write a guarantee letter to guarantee that if you die, it has nothing to do with the forced labor camp." The second day, when Yan Lifeng saw that Sun Shuxiang didn't write a single word, she dragged her to the clinic for a drug injection.

In June 2010, Sun Shuxiang experienced head pain and her mind was not clear after being forced to receive injections of unknown drugs administered by the medical section in the forced labor camp. At that time, chief of the forced labor camp Tian and the Procuratorate officers in the forced labor camp used a camcorder to record Sun Shuxiang, and declared that this could be used as evidence in the future. The Procuratorate officers asked her, "The forced labor camp didn't force you to work, but you insisted on working. Is that right?" Sun Shuxiang answered, "They did not have me work the first day. But the next day they forced me to work." But the officers immediately stopped recording just after her first sentence. Then she was sent to the second floor to meet with her son. While Sun Shuxiang's mind was not clear, she asked her son to sign the paper for release on medical bail. In the evening, Sun Shuxiang's body was hot and she was sent to the China and Japan United Hospital. When she arrived at the hospital, the room was full of police officers waiting for the examination results. The examination confirmed that there were three scars in her stomach and she could not cough, cry, smile, or sneeze, lest she experience severe pain. The examination also found her abdomen was full of fluid. The doctor said, "This old woman has many sicknesses of the stomach and abdomen. We need to do an abdominocentesis." Sun Shuxiang didn't agree to that. Also the entire inspection process was performed without the knowledge of Sun Shuxiang's children. The police called her children to come only to sign the documents. They also didn't reveal the examination results to Sun Shuxiang's family. After a very long time, Ms. Sun's son was finally allowed to take his mother home.

After Sun Shuxiang returned home, she insisted on studying the Fa and practicing the exercises. Gradually her body recovered.