(Clearwisdom.net) Wang Zuoan, director of the Chinese Communist Party's (CCP) Bureau of Religious Affairs, was sued by Falun Gong practitioners in Taiwan for his crimes of genocide and violation of civil rights convention in persecuting Falun Gong on September 15, 2010. He was scheduled to arrive in Taiwan on that day. The criminal lawsuit was the second one by Taiwan Falun Gong practitioners, and occurred one week after suing Zhao Zhengyong, governor of Shanxi Province. 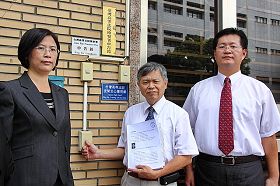 Mr. Chang Ching-hsi, director of the Taiwan Falun Dafa Association, said, "Among the Chinese officials visiting Taiwan recently, several are primary culprits in the persecution of Falun Gong. Therefore, we will pursue judicial means to bring them to justice."

Ms. Chu Wan-chi, spokesperson for the Falun Gong human rights lawyer team, said, "Wang Zuoan leads a bureau that specifically persecutes religions and beliefs in China. Using the name religion and culture exchange to cover his crimes, he comes to Taiwan. We Falun Gong practitioners can't ignore this, and are filing a lawsuit against him at the High Prosecution Bureau for his crimes of genocide."

Wang Zuoan and former director Ye Xiaowen of the bureau held many press conferences related to the persecution of Falun Gong, accepted interviews, and wrote articles that slandered Falun Gong. Their slander and lies instigating hatred towards Falun Gong were reprinted in state-run Xinhua News Agency, People's Daily, Central TV, and other media outlets. These articles were also used as learning materials for CCP and governmental officials.

The CCP Bureau of Religious Affairs, under the direction of Wang and Ye, slanders and demonizes Falun Gong, and disseminates their words via religions, education, and media to instigate hatred. The bureau applies its experience in persecution of religions during past several dozen years to deceive the Chinese people and the international community, and assists Jiang's faction in executing its elimination policy.

As of September 15, 2010, the documented number of death cases of Falun Gong practitioners due to the persecution were 3411, based on incomplete investigation. Hundreds of thousand of practitioners have been unlawfully imprisoned in forced labor camps, sentenced to jails, or have died as part of the CCP's live organ harvesting for lucrative profits.

The Coalition to Investigate the Persecution of Falun Gong (CIPFG) condemned Wang Zuoan for his persecution of religions under the name of religious management. Mr. Lai Chin-de, director of CIPFG Asian Delegation, said that religious freedom is a part of human rights and protected by the Chinese constitution, and that no one should persecute religions.

To let people across the world support the effort to arrest CCP human rights perpetrators such as Zhao Zhengyong, the Shanxi governor, Taiwan's Falun Gong human rights lawyer team has initiated a co-signing activity on the website: http://campaign.tw-npo.org/sign.php?id=2010091108313700.