Rally in Quebec Calls for Immediate End to the Persecution (Photos)

(Clearwisdom.net) For the past eleven years, Falun Gong practitioners throughout the world have been actively working to end the brutal persecution taking place in China. On August 14, 2010, Falun Dafa practitioners again rallied in Quebec, Canada to share the beauty of Falun Dafa, expose the Chinese Communist Party's persecution of Falun Gong, and to commemorate their fellow practitioners who have died in the persecution in China. Representing Quebec, a Member of Pariament in Ottawa, from the Block Québécois, Mr. Michel Guimond, wrote a letter of support to the local Falun Dafa Association, stating that the persecution must stop immediately. 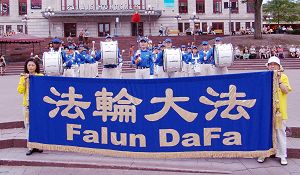 The Divine Land Marching Band debuts in Quebec at the rally on August 14, 2010

The activities started at 3 p.m. at Place d'Youville. Host Marie-Helene said that this was the second time Falun Dafa practitioners held activities in Quebec to expose the persecution of Falun Gong in China. "We are Falun Dafa practitioners from Montreal, Quebec and Ottawa. This is a good opportunity to help the local residents learn the truth about the persecution of Falun Gong and to learn about the beauty of Falun Dafa."

The Divine Land Marching Band performed for the first time in Quebec, playing the songs, "Falun Dafa Is Good," "Drums and Trumpets Shake the World of Ten Directions," "The Fa Rectifies The Cosmos," and other pieces for about half an hour. The audience was very receptive and applauded enthusiastically. After the performance, the practitioners went to several downtown parks to demonstrate the exercises. A number of people learned the exercises during the demonstrations. Practitioner Marie-Helene noted that the residents of Quebec are very interested in Falun Gong and often contact practitioners for exercise teaching classes.

Yvonne, who works as an insurance agent, said she was looking for a faith and something that could bring peace to her heart. She watched the Falun Gong practitioners from afternoon to evening. She said, "I saw some people doing exercises in the park so I watched then. Suddenly I realized, oh my God, isn't this just the thing I am looking for! " She then immediately learned the exercises in the park.

Rally Calls for an End to the Persecution

Mrs. Chen, a Beijing Falun Dafa practitioners in her 60's, talked about her personal experiences of persecution in China. "I was sent to a forced labor camp two times and suffered many tortures that resulted in loss of hearing and my limbs being permanently injured after forced-labor. It is still frightening to recall the tortures. Today, I am lucky to be in Canada and have my freedom. But there are still thousands of Falun Dafa practitioners being persecuted in China. I totally understand their suffering. Here I strongly urge all levels of government officials and all people to help stop the persecution of Falun Gong in China immediately."

Representative of Quebec Mr. Michel Durand wrote a letter to the local Falun Dafa Association stating that he would join the voices against the persecution and work for the end of the persecution.

Yvonne, who had just learned the exercises in the afternoon, joined the candlelight vigil and sat among the practitioners with a candle in her hand. She said, "Everyone has the right to freedom of belief and everyone has the right to freedom of thought. Hearing that so many people have died because of their belief in Truthfulness Compassion Tolerance, I feel very sympathetic to the Falun Dafa practitioners in Mainland China and I am angered at the Chinese Communist Party. I realized that I must do something (to help them), so I join the candlelight vigil."