(Clearwisdom.net) On July 3, 2010 Falun Gong practitioners participated in the Independence Day Parade in O'Fallon for the sixth time. Their entry won the Most Patriotic and Best Music Award. 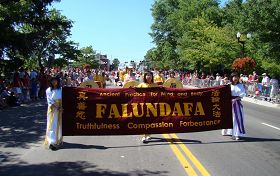 Falun Gong practitioners' entry in the Independence Day Parade in O'Fallon on July 3.

Falun Gong's contingent had a unique style. It was composed of the Tang Drum team, exercise demonstration, traditional costumes, and a carefully decorated float. The entry won applause and cheers from the crowd. Many spectators requested introductory fliers and asked about where to learn the exercises.

The entry won the Most Patriotic & Best Music Award. At the ceremony in the evening, the Mayor of O'Fallon issued the prizes to all the winners. Many of the event organizers from the city hall shook hands with the practitioners and told them "Your entry is terrific!" "It's the most outstanding every year!"

Ms. Jiao just came from China. She was excited about being in the parade. "I almost cried when I got on the float. Back in China, I had to be very careful walking on the street because of the suppression. My strongest impression about the US is that it's so free. The government and the people support and welcome large activities like this. If it was in China, the authorities would guard against any small movements and the officers would mobilize to surround the parade. When I was in China, I thought that was how it supposed to be. Now I know what freedom really is and how people are supposed to live."