(Clearwisdom.net) On June 26 and 27, the annual World Beat Festival was held in Salem, Oregon. For the ninth time, local Falun Gong practitioners participated in this big event. More than 100 groups performed in nine divisions. 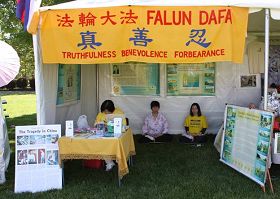 Many tourists learned the truth of Falun Gong. They were appalled to learn of the brutal persecution of the practice in China. People could not believe such a thing could still happen in the 21st century. Some said they came to this festival every year and saw practitioners every year. They thanked practitioners for bringing the truth and encouraged them to keep it up. Some of them took many truth-clarifying materials for their friends. Others learned the exercises.

One young Chinese man, who had just come to the US, was surprised to see the practitioners' booth. He talked to them and learned the facts about the persecution. He thanked practitioners again and again for telling him the truth. It was apparent that his attitude towards Falun Gong had changed greatly.