(Clearwisdom.net) On June 26, 2010, Falun Gong practitioners held activities at Karlsplatz in Munich, Germany to raise awareness about Falun Gong and the brutal persecution. Many people signed a petition calling for an end to the persecution, and some also expressed interest in learning Falun Gong. 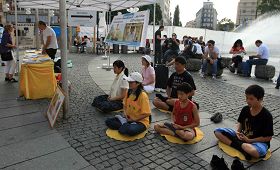 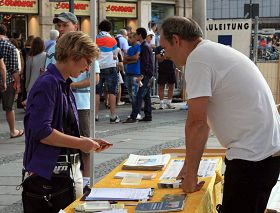 Many people stopped to watch to the exercise demonstration. Some talked with practitioners, asking why the Chinese government persecutes Falun Gong, and what Falun Gong is. After learning about what is happening, they signed the petition to support practitioners. 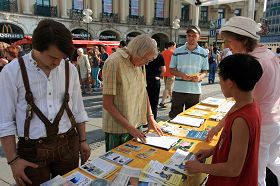 Some Chinese people looked surprised to see the banners about quitting the Communist Party. They accepted informational materials, and took photos of the practitioners' display. One older Chinese gentleman said, "Now I believe that I will see the collapse of the Chinese Communist Party in my lifetime."