(Clearwisdom.net) The 100th Truthfulness-Compassion-Forbearance International Art Exhibition debuted at 5:00 p.m. on June 28, 2010, in the gallery on the first floor of the Korea Press Center, in Seoul, South Korea. 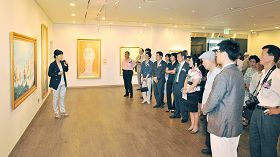 During the past six years, the Truthfulness-Compassion-Forbearance International Art Exhibition has been held in over 200 cities in more than 40 countries. This is the 100th exhibition of these paintings in South Korea since September 2004. It is the number-one art exhibition in this country. 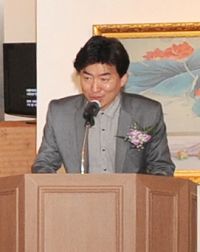 Mr. Ha, Director of the Seoul Art Association, spoke at the opening ceremony

Mr. Ha, director of the Seoul Art Association, said at the opening ceremony, "Painting represents the emotion of an artist. From this perspective, the paintings in the Truthfulness-Compassion-Forbearance International Art Exhibition present us with peaceful messages. We hope these messages will spread farther and wider. As representatives of the Seoul Art Association, we extend our appreciation to the organizer of the exhibition." 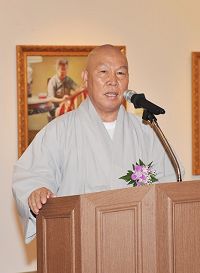 Mr. Kim, abbot of Baolin Temple in Washington and director of the South Korean Buddhist Temple Association in Washington, DC, gives a speech

Mr. Kim, abbot of Baolin Temple in Washington and director of South Korean Buddhist Temple Association in Washington, DC, said in his speech, "I have seen many Falun Gong practitioners and their events in the USA, and I have noticed that many Americans practice Falun Gong. I think Falun Gong is a good practice with an aim to keep healthy. I am saddened to know that the Chinese Communist Party (CCP) persecutes such a good practice. How can the CCP suppress such a kind group of people? It is intolerable."

He continued, "Falun Gong practitioners impart the facts in an adverse climate and make continuous efforts to improve human health. I hope you accomplish even more in the future." 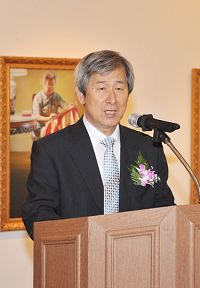 Mr. Kwon Hong-Dae, chairman of the Falun Dafa Association of Korea, spoke at the opening ceremony

Mr. Kwon Hong-Dae, chairman of the Falun Dafa Association of Korea, the hosting organization of the exhibition, said at the opening ceremony, "These artists are Falun Gong practitioners. Some of them, including Professor Kunlun Zhang, experienced brutal persecution at the hands of the CCP. We are hosting the exhibition to call on people to help these practitioners and stop the CCP persecution of Falun Gong."

The one-week-long exhibition is divided into four sections, including harmony, adverse environment, courage, and justice. The paintings present Falun Gong practitioners' uncompromising courage in protecting Truthfulness-Compassion-Forbearance in the face of the CCP's unjust and cruel persecution, which disregards freedom, dignity, and humanity. The exhibition also includes artworks that won gold and bronze awards in the Chinese International Figure Painting Competition hosted by NTDTV in 2008.