(Clearwisdom.net) On July 20, 2010, practitioners in France assembled in front of the Chinese Embassy in Paris to protest the CCP's 11 year long brutal persecution of Falun Gong. They displayed banners and truth-clarifying boards exposing the persecution, demonstrated the exercises, and invited people from every sector of life to make speeches. The Divine Land Matching Band also performed. 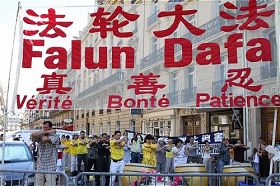 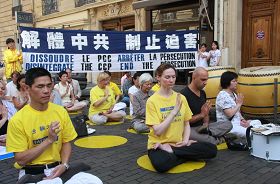 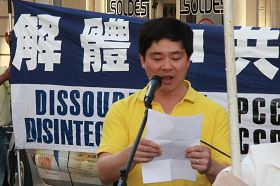 The Chairman of the French Falun Dafa Association, Mr. Tang Hanlong, said in his speech, "Falun Gong has been protesting against the persecution for 11 years. What we know by now is that 3,397 practitioners have died as a result of the persecution, that thousands have been sent to mental hospitals, and that hundreds of thousands are still detained in labor camps. What we don't know is that as a consequence, how many children have lost their parents and become orphans, and how many students were deprived of right to go to school. Countless employees were deprived of their right to work, merely for practicing Falun Dafa. The CCP also spread its smear campaign against Falun Dafa overseas and put pressure on foreign governments who were willing to expose the persecution through diplomatic and economic means.

What was proved during the 11 years 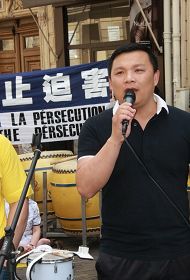 Mr. Zhang Jian, a democracy activist in Paris, made a speech on the site. He said, "It was the Chinese Embassy across the street who invited the founder of Falun Gong, Mr. Li Hongzhi, to teach the Fa and the exercises in France in 1995. Falun Gong was recommended to the French and Chinese community here as part of Chinese culture. Many officials and their family members, together with lots of overseas Chinese learned Falun Gong at that time."

"However, four years later, the CCP launched an inhuman, brutal persecution of Falun Gong throughout the whole of China. Everyone who lives in a free country or who has any common sense of democratic and human rights, knows that the CCP's conduct is not something a normal country is supposed to have. It's only in China that people would be arrested for practicing a kind of exercise. It's only in China that people would be arrested for reading a book, Zhuan Falun. It's also only in China that saying the words 'Falun Dafa is good' would lead to being detained. The majority of the arrested practitioners have not had legal trials and legal procedures, but were sent to labor camps directly, where they were tortured very severely."

"Today, the CCP has persecuted Falun Gong for 11 years. What has been proved during these 11 years? We've seen the persecutors become more and more corrupt and more and more evil, while those being persecuted have gone toward the light more and more. I hope that some people who still have a conscience in the CCP system could quit that evil group and embrace the light. Together with more and more upright Chinese, get away from the evil and be close to the light!"

The persecution is illegal

The democracy activist, Mr. Wang Menglong gave an interview. He said, "During 1996, 97 and 98, I had been seeing some people practicing in some parks in Paris. I felt they were very peaceful and well-educated. It was a graceful exercise and someone told me it was Falun Gong. I concluded naturally that it is from Chinese traditional culture, and to Chinese people, it is totally beneficial without any harm either to the mental well being or to the physical body. But I would never expect that the CCP would conduct such a brutal persecution against it. It is unreasonable by law. China's Constitution states that Chinese citizens enjoy the freedom of belief. If Falun Gong is a kind of belief, the people have the right to believe it. If it is an exercise beneficial to the health, the CCP has even less excuse persecuting it. So I have been objecting to the CCP's evil conduct of persecuting Falun Gong from my heart."

The culprit of the persecution is going to face the justice

Mr. Fang, an overseas Chinese in France said, "The CCP's leader Jiang Zemin used to say two things. One is it would be extremely ridiculous if Marxism-Leninism couldn't defeat Falun Gong. Another one is that they would eradicate Falun Gong within three months. It has been 11 years since July 20, 1999. Jiang Zemin did not defeat Falun Gong, but ended up being a perpetrator of crimes against humanity. Though the CCP hasn't collapsed yet, Jiang Zemin and his clique have been charged with crimes against humanity and will be brought to trial in the near future. I would like to warn the people in the CCP's system that you'd better separate yourself from the CCPor you won't have a good result."